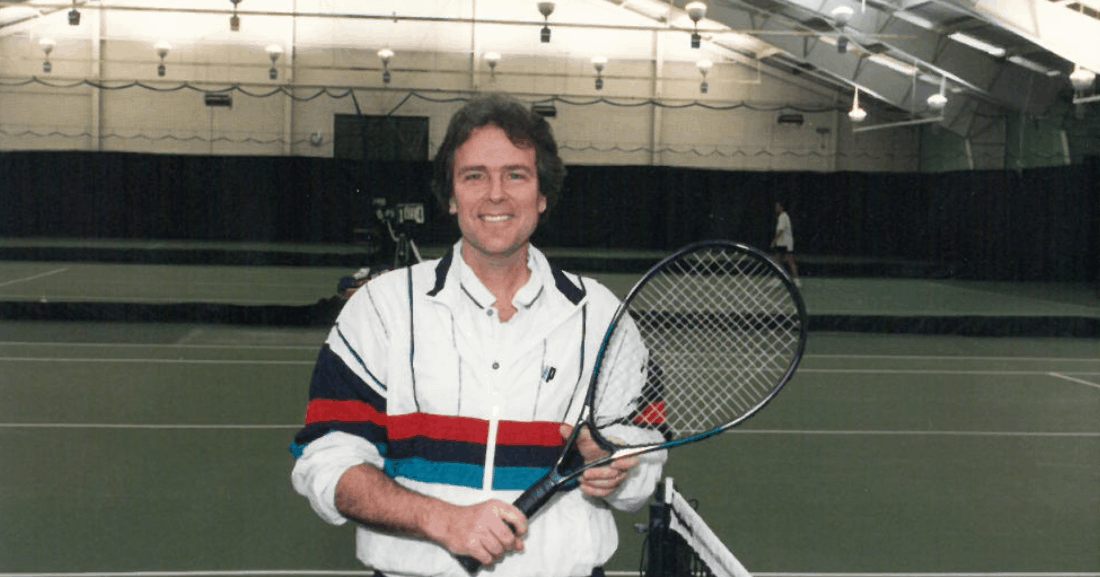 After a long and successful tennis career, Wally Bronson, Tennis Director at Elite-River Glen, has decided to retire. Read about how he got started in tennis, his favorite moments at Elite, and what he plans on doing next.

As a child, Wally actually first played baseball from ages 8-12 years old. After his parents moved to Bayside, they put a tennis court in their backyard, which enabled him to try tennis starting at age 13. It was at this point where Wally gained a greater interest in tennis and he began taking private lessons with a pro at their home.

Once Wally entered high school, he joined the tennis team at Nicolet High School in Whitefish Bay, where he played on the varsity squad all four years. He began participating in tournaments at age 16. He saw plenty of success at Nicolet, highlighted by back-to-back semifinals appearances in the state tournament in his junior and senior years.

Following his graduation from high school, Wally then went on to attend the University of Wisconsin-Madison. It was there where he played 3 years of collegiate tennis. Every summer, Wally would return home and worked as the Tennis Director for the Nicolet recreational tennis program.

When asked about his greatest accomplishment in his tennis career, Wally views his career having two components: teaching and playing. He considers his greatest teaching accomplishment when he was awarded the Club Corp. of America Tennis Pro of the Year in the 1980s. The award recognized successful tennis programs, taking into account number of participants, variety of programming, etc. Wally recalls traveling to Charleston to receive the award, “It was a great honor.”

When it came to his playing career, Wally considers his proudest moment was helping Team Wisconsin clinch the 1970 Junior Davis Cup. They were competing against 8 other teams from the Midwest at the Town Club in Milwaukee. His teammates, including Elite tennis pro Rick Vetter, had already won 3 matches. In a clutch moment, Wally seized the fourth match victory to win the Midwest Junior Davis Cup for Wisconsin. “It was a hectic moment…playing at the Town Club right where everyone lives. I wasn’t the best player on the team, but I was fortunate enough to win it for our team.”

When asked about what his favorite moment was from his time here, Wally said nothing sticks out because there are so many enjoyable times. “Every lesson I have a moment, because every time someone does something that they haven’t been able to do, those are the moments that I remember. I’ve been lucky I’ve been able to have that. As a teacher, it feels really good to see them improve and get excited.”

Even though he loves teaching, Wally notes the reason for his retirement as needing time for his body to recuperate. When asked if he will play more, he wants to take it easy for a year and then “see what happens.”

Before he departs, Wally wants to leave some advice for not only the tennis players, but also for every member at Elite. “For the people that play tennis, I would say find a passion for why they’re playing. Tennis is one of those unique sports, where you can play for different reasons. The first is you can play and be social, whether it’s playing doubles, or just going out to play with others. The second way is to play for exercise, such as getting your steps in. And the third reason to play is to be competitive and play to win. If they can find out what reason they’re playing for, they’ll always enjoy themselves every time they go out on the court.”

For every member at Elite, Wally had this to say:

“When the Elite members walk into the club, they should enjoy the wonderful facilities that Kay has provided for everyone. When they walk into the club, they can forget about everything else and enjoy being here for whatever time period they’re here, whatever they’re going to do, whether it’s training, or yoga, or tennis. It’s a great opportunity to get away from daily concerns they have and get out of the rat race for a little while.”

We would like to thank Wally for his many years of dedication and service, and wish him well in his retirement! Thanks Wally and good luck!