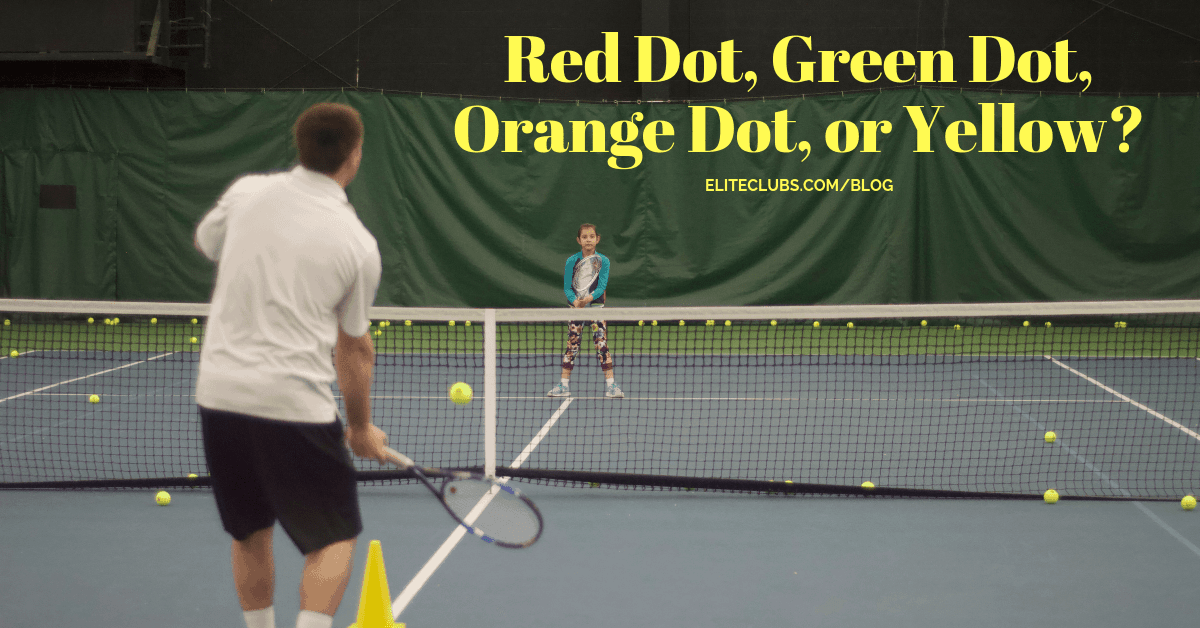 While you might be eager for your child to progress from a low compression ball to a higher bouncing ball quickly, there’s quite a number of benefits from starting out on a red dot ball. We’ll explain why it’s still important to start slow before we advance our junior players to larger court sizes and yellow balls.

If you have ever stopped into watch the 10-and-under children playing tennis, you might wonder what’s the deal with the different balls. Just as in any other youth sport, tennis has evolved to use equipment and court sizes that fit youth players. Shorter racquets, low compression balls, and scaled down court sizes make it easier to play tennis for kids. The number one question/concern I get from parents is when to advance to a more challenging ball. The answer is complicated as there are many factors at play. Too often I see that parents (and sometimes coaches) want their child to advance very quickly to the higher bouncing ball and full size court when this is NOT what is best for the child.

This video clearly shows the similarity between professional and advanced Red Dot players with their rally cadence. Notice how the ball is exchanged between the two players at roughly the same rate. By using the smaller court and low compression balls, these two children are able to practice a similar exchange rate that they will experience on the bigger court when they grow into their adult bodies.

By developing a child’s game with the proper sized court and equipment, the child learns strong court positioning, sound grips, tactical awareness, and strategies that would be otherwise more challenging to develop on an improper sized court with a higher bouncing ball. So before your child gets the itch to progress onwards in court size and equipment, think smaller and slower!

Dustin is a USPTA P2 certified teaching pro who has been teaching full time since 2012. He began teaching tennis his senior year in high school where he worked at the Waukesha Tennis Association for 5 years. Upon graduating from the University of Wisconsin Oshkosh with a degree in Physical Education, Dustin worked as a teaching pro at Lake Country Racquet and Athletic Club in Hartland, WI and then moved to be a Director of Tennis at Four Lakes Athletic Club in Elkhorn, WI. At the University of Wisconsin Oshkosh, he was an Assistant coach for the women’s tennis team for three seasons under head coach Steve Francour.