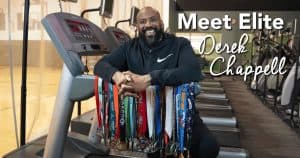 Derek Chappell has been a member of Elite Sports Clubs for over fifteen years. Throughout the years, he has worked on himself physically and mentally, as well as working on and achieving his personal goals.

He joined the club looking for a new workout environment and loved what Elite had to offer. Unlike his previous gym, Elite has a lot more treadmills that he uses for as long as he wants. There is one specific treadmill that Derek always runs on because “it never times him out.” He can run for hours and hours at a time without having to stop, which is how he prefers to train. Treadmills are the most relevant to Derek since he spends most of his time at the club training for races, anything from a 5k to full marathons.

Running has helped Derek lose over 130 pounds. Since he has been working out at Elite, Derek has enjoyed working with trainer Alex Shapsis. Alex has helped Derek immensely with his running form as well as weight training. “Alex played a huge role during my journey of losing over 130 pounds.” He always helps Derek throughout his training and is there if he has any questions. Alex also served as a resource for finding healthy nutrition options and suggestions for changing food habits.

“He can run for hours and hours at a time without having to stop, which is how he prefers to train.” 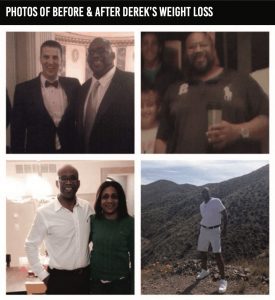 Utilizing all aspects of the club

Besides the fitness center, there are many areas that appeal to Derek at Elite, such as the massage services, yoga classes, and the availability of physical therapy. Weekly massages are a huge perk of which Derek takes advantage. When Derek was injured, physical therapist Kurt Alt helped him rehab back to a healthy state. Derek refers to Elite as a “one stop shop,” since everything he needs is in one place ready for him.

Motivation plays a huge role in deciding to make a lifestyle change. For Derek, his mom was an important part of that process. Derek’s mom had health problems and she did not want those same health problems to be present in Derek’s life. She encouraged him to live a healthier lifestyle and lose weight so that he could be around for his family. He made a promise to his mom, which sparked his weight loss journey. The internal drive to make his mom proud played a huge role in the success Derek accomplished.

The weight came off fast, at first. At the beginning, Derek was losing up to ten pounds a week. He then slowed down to losing five pounds every couple weeks. Derek states, “Eventually, I began to gain muscle while still shedding off fat.” The first thing Derek noticed was that he would chafe a lot during his runs, which led to him shopping for new clothes that he could wear and be comfortable in during his workouts. He figured out what kind of shorts he liked running in best and that helped with the discomfort while running.

“Motivation plays a huge role in deciding to make a lifestyle change.”

As he was losing weight, he developed a passion for running, which initiated his start to running races. He has done a variety of races in many different destinations across the world. Since Derek has started running, he has participated in a total of 43 races. He has visited Philadelphia, Las Vegas, Miami, Tampa, Disney, and even Paris, France, to run races. He would love to be able to do the marathon in Hong Kong one day so his destination race days have not come to an end. He also mentioned that the Big Sur race is also on his list of dream races.

The ups and downs and all the traveling for races never bothered Derek’s family. They go to every race they can to cheer him on. Working out and becoming fit led Derek to a healthier and more confident lifestyle. But it wasn’t always that way. Planes were not very comfortable, which made traveling difficult until he started losing weight. “I gained confidence and felt like I could do more active things with my family and all around in my life.” As he got healthier, it became much easier to travel. He was able to do more activities with his family, such as snorkeling or scuba diving while on vacation.

Derek’s family has supported him throughout his entire journey in other ways, too. Specifically, they are a positive influence on eating healthier. Healthier food options are a must with lifestyle changes and Derek’s family helped him find delicious meal choices. This aided in the weight loss process. 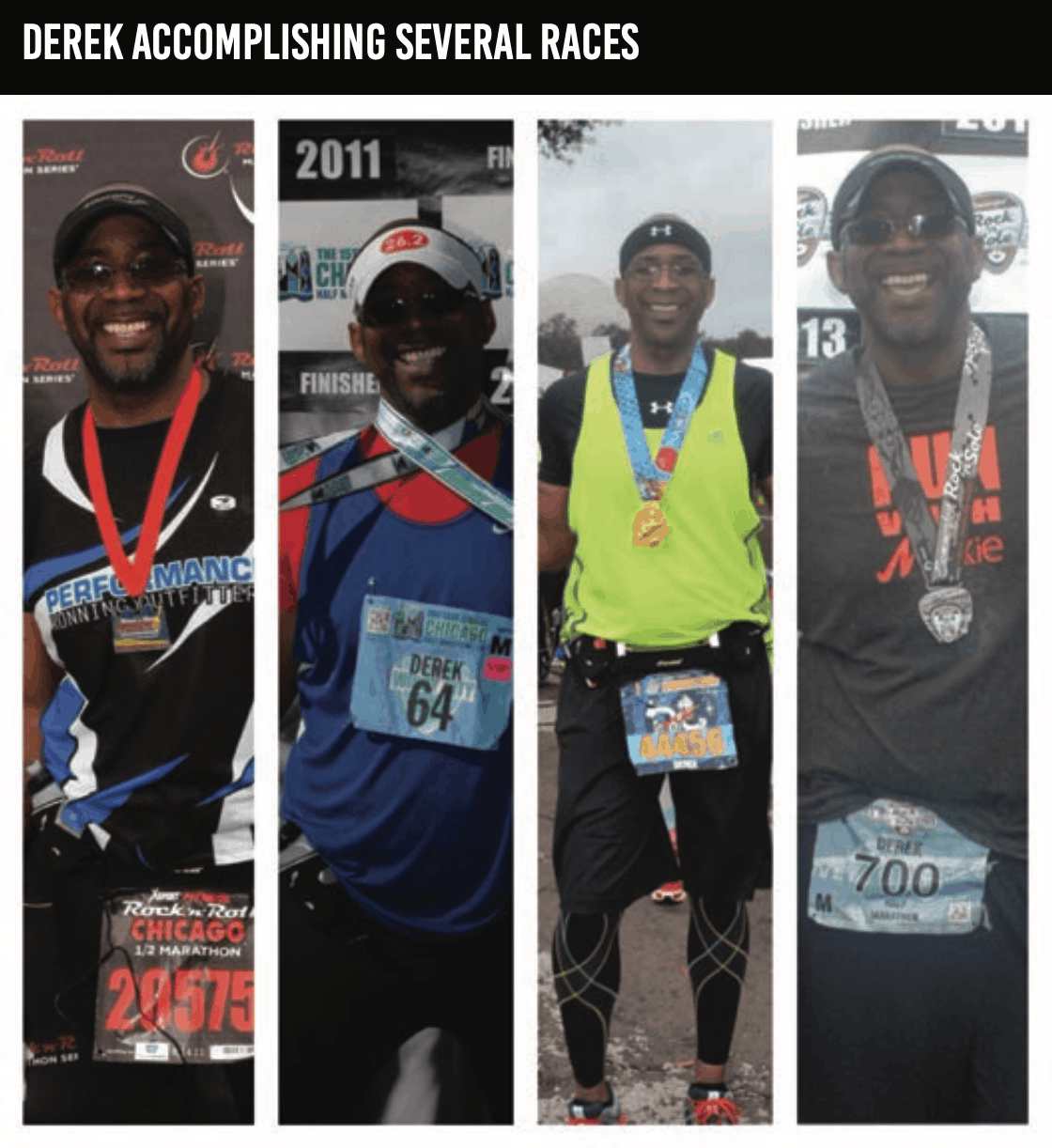 In this journey together

Derek is known pretty well throughout the Elite community and he explains the feel of the club as more of a family. Everyone supports each other and their goals. To quote Derek, “I see all of these people out in the neighborhood and we all keep each other in check and accountable.” It is much easier to stay motivated when there is a supportive team of people around. Derek also explained that he used to do races, some destination races as well, with other members from Elite. He loved having that close connection of a relationship to be able to go run races with people who train where he does. Overall, Derek feels the love all around, from family to friends along with everyone else who helps him train.

Currently, Derek is training to get back into running shape. He wants to get back to training for a half marathon or marathon. He has been working every week and increasing the number of miles he runs each day. The ideal plan is to run a race in February. However, going through with the plan of racing in February will depend heavily on how much Derek travels before February. Derek states, “The hardest part of training is traveling while in training because it is easy to miss a workout or eat unhealthy food.” Especially in other countries, there is not always the correct equipment available. Also, not knowing an area can result in a missed workout or shorter workout than usual. For this reason, Derek does not like to travel when he is training for a race.

There are many different things Derek thinks about while running but he, of course, always has his music playing. Derek enjoys listening to music but he also likes watching the stock market. He finds that the stocks are a good distraction and the time, which is usually a couple hours, flies by. His favorite music to listen to is Hip Hop because it keeps him energized. He keeps his playlist full of “pump up music” to help him run his best. Derek acknowledged that bad runs sometimes happen but at least he still got a workout. “As long as there were no injuries, the run could not be considered ‘bad.’”

Everyone’s journey is different but there are definitely some tips that can be learned by people that have undergone a healthy lifestyle change. The advice Derek would give to someone trying to change their lifestyle would be to start by setting smaller goals. Instead of trying to lose fifty pounds right away, setting a goal to get into the gym a certain number of days each week would be easier to reach and therefore, more effective. He has learned that it is easier to achieve a goal that is not so far-fetched, which then encourages you to keep going. Small goals allow for new ones to be set often, keeping the journey updated and fresh.

Derek recommends going in to work out four times a week for people who are starting to work out. Dedicating four days a week multiple months in a row will create a habit of working out. Once a habit is created, it can be realized quickly when the habit has been broken. Derek has noticed that his body resists being out of shape by sending signals that he needs to get a workout in. He explained that his body “doesn’t like it” when he allows himself to get out of shape or miss workouts. The internal habit that has been built keeps Derek in check and accountable. This is a never-ending journey of creating healthy habits that will result in a happier life.

Derek Chappell is proud of his accomplishments so far, but he is in no way settling with what he has accomplished. The journey has just begun and there are more goals to meet, new destinations to reach, and happiness to chase.

Derek Chappell celebrating a run with his friends

Check out our live interview with Derek Chappell!