The Caspers’ 30 Years of Dedication to Elite and MACC Fund 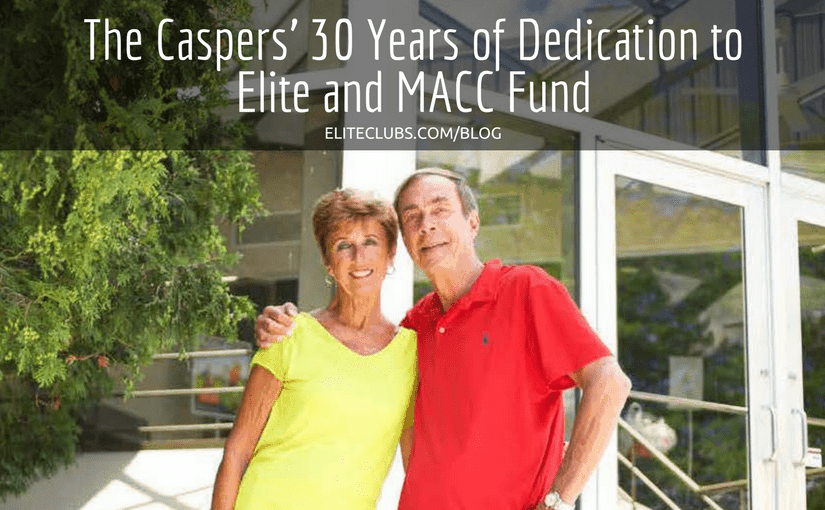 The year is 1986 and Kay Yuspeh just bought her first club, the Highlander, ushering in a new wave of tennis clubs. With this new wave came new members as well, including two Brookfield natives in particular, Marilyn and Jim Casper. Over the past 30 years the Casper’s have become dedicated members of Elite as well as the MACC Fund.

When they first joined, Marilyn and Jim were avid tennis players enjoying mixed doubles and the comradery within the club. But it soon became a family affair, as their three sons were interested in tennis as well, and eventually swim club for their youngest. The Highlander became a second home to them, one that fostered fitness, fun, and personal growth.

“We still see a lot of our friends we made playing tennis, playing mixed doubles,” Marilyn said. “We still get together with them.”

The Caspers have continued to take in the Elite experience throughout their 48 years of marriage, but their activities in the club have changed over that time. Due to injury, they have retired from the tennis court and taken up swimming for exercise instead, using either the indoor or outdoor pools depending on the weather Wisconsin throws at them.

Aside from swimming, they have also come to enjoy the leisurely aspects of the clubs, always carving out time for reading and chatting poolside. For them, the club provides a very relaxing change of scenery outside the house and an opportunity to see friends.

When the 2-year-old son of the Milwaukee Bucks announcer, Brett Doucette, was diagnosed with leukemia, Bucks player and family friend Jon McGlocklin wanted to help in any way he could. On his retirement night, Jon introduced the MACC Fund, an organization that would team up with local athletes and businesses to raise money for critical research to give kids like Brett a better chance at survival.

As a pediatric hematologist, oncologist at Children’s Hospital, Jim was part of the team taking care of Brett, which is how the Fund became a personal interest of his. Jim is not only proud to have been part of the Fund’s efforts, but says the state should be proud of them too.

“The state is very lucky to have the MACC Fund, and certainly Children’s Hospital and the Medical College of Wisconsin have benefited greatly,” he explained. “There are a number of other great organizations like Ronald McDonald House and Make-A-Wish that help support other things that are really necessary, but the MACC Fund is focused on supporting the research.”

A few years after it began, some of the athlete’s wives and other women involved with the Fund came up with the idea of having a women’s group, including Marilyn. As a result, Women for MACC was born, and Marilyn was one of the first co-presidents with the wife of Brewers player, Sal Bando.

Women for MACC operates separately from the MACC Fund, as they host their own events and elect their own board members and president. However, all of the money they raise goes directly back to support the MACC Fund at the end of each year.

In the past, they have hosted hugely successful events like children’s fashion shows and tennis tournaments. The area’s tennis clubs such as Elite Sports Club – Brookfield and Mequon would host the matches, and at the tournament’s peak, they had at least eight clubs participating. Women for MACC currently hosts an annual Pasta Fest and golf outings, among other events throughout the year.

“One year Billie Jean King came, she was probably our biggest name…,” Marilyn said. “Kay was really involved too, which is why she is still passionate about maintaining her relationship with the MACC Fund.”

Since it began, the MACC Fund has raised over $45 million to fund the crucial research. With this money, research has been able to focus primarily on the different forms of cancer.

“Part of that too is bone marrow transplant which is a treatment for some of the patients with different types of cancer,” Jim said. “They also support research in hematology and blood cell work. Sickle cell disease especially is another huge area where we’re trying to make inroads in terms of transplant, new therapies, things like that.”

With the MACC Fund’s efforts and alongside the advancements made in the medical field since the 1970s, survival rates have drastically improved.

As Jim describes, “You were probably in the 20 to 30 percent survival, and now it’s up to around 80 to 90 percent. For some of the leukemias it’s above 95 percent.”

Elite Sports Clubs is proud to continue supporting the MACC Fund because their work is bringing real change to the Midwest, striving for health even in a time of illness.

Having just retired, Jim and Marilyn are realizing just how important health and fitness are in the long run. For Jim, he has been able to lose weight over the years, and keep it off because Elite has provided a motivating environment for him to do so.

“I think I’m more aware of what I’m eating, and I really want to keep the weight off,” he explained. “I think for both of us, we stay active, and we like the club because we can do that.”

Jim sees one strong similarity between Elite and the MACC Fund in his experience with both: both have a vision.

In the clubs, this change can most notably be seen in the variety of opportunities the club provides for maintaining a healthy lifestyle.

“When we joined the Highlander, it was tennis and racquetball. And when you look at what it is today, it’s totally different. From swimming to classes to basketball to fitness centers, it has just mushroomed compared to what it used to be,” Marilyn described.

Whether the clubs are used for intense tennis match play or distance swimming followed by reading like the Caspers, Elite has something for everyone. For Jim and Marilyn, the club has followed them through the various activities they have been involved with. From an early start in tennis with their sons to using the club as a go-to spot for relaxing, they have stuck with Elite and Elite has stuck with them. 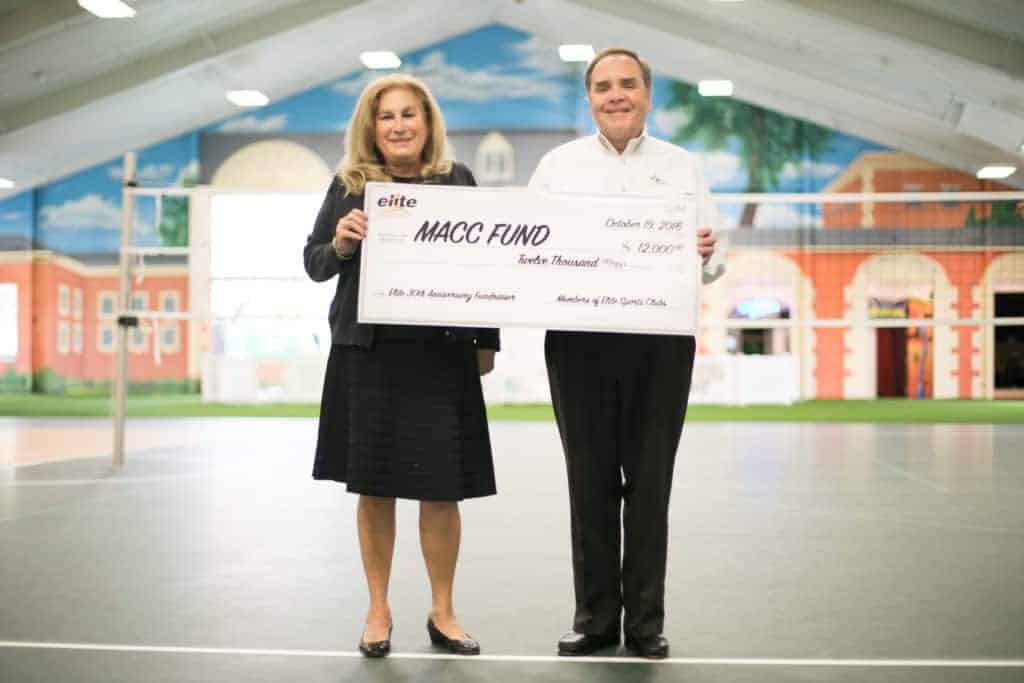 Thanks to the generosity of Elite’s members, we were able to donate $12,000 to the MACC Fund with the proceeds from our 30th Anniversary Party ticket sales. In the photo above, Elite Sports Clubs owner Kay Yuspeh presents the check to MACC Fund executive director, John Cary at Elite’s new multi-purpose activities campus, The Quad.