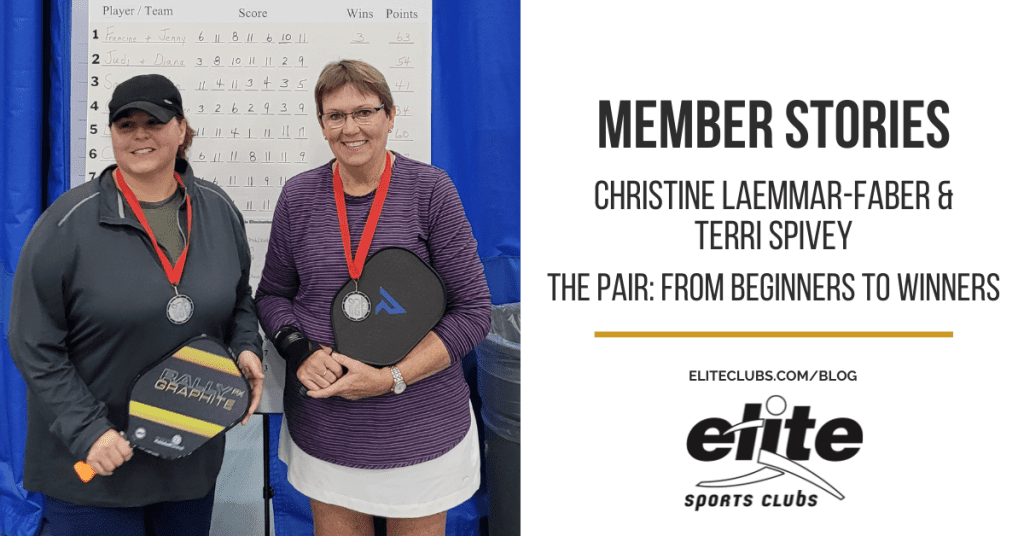 If you haven’t heard, pickleball is BOOMING at the clubs as of late. With our new dedicated pickleball program, we’ve seen a huge influx of new players, like Christine Laemmar-Faber & Terri Spivey. With just a few months of practice working with Elite pickleball pro Chris Amidzich, they’ve already got a winner’s story to tell!

Gaining Confidence from the Start

Terri started playing pickleball on July 4th weekend of 2022, and Christine started playing in September 2022, both in Chris A.’s Saturday morning “Pickleball with a Pro” class. Ever since, they’ve been hooked!

Christine: “From the very first time I held a paddle at my first class, Chris was so supportive, encouraging and positive. He is passionate about his role as pro/coach – which drew me into this new (for me) sport. I so appreciate how he is trying to grow enthusiasm, not only by his energy, but also establishing the Pickleball Studio for practice, league play, clinics, and organized open play times. The players that I have met in class and league seem energized by Chris’s enthusiasm as well.”

Terri: I was able to play and practice indoors a couple times a week, regardless of weather conditions. I met lots of people at the club through “Pickleball with a Pro,” open play, and league. The instruction, play and new friendships have helped to build confidence. Chris the director is always encouraging, pointing out strengths while working on new skills. He helps keep us all positive.”

Christine and Terri met through the pickleball programming at Elite Sports Clubs in Brookfield.

Christine: “There seems to be a lot of groups – men and women – playing on their own and it’s great Elite has provided two courts at various times for the players. The pickleball atmosphere is friendly and the players are always smiling and enjoying themselves. How can you not want to be a part of that?

I am a tennis player and though pickleball has some similarities, I enjoy the challenge of the different dynamics/strategies of pickleball. Currently, I am trying to play pickleball 3 times a week in Chris’s organized programs. The other players have been very welcoming and it’s a great way to meet new pickleball friends.”

From Beginners to Winners

In a mere matter of months, Terri and Christine partnered up and found themselves competing at the “Serve It Up For Good” pickleball tournament in Franklin, finishing in second place! Both of them really appreciate the competitive nature of the tournaments, and it allows them to really use the skills they’ve learned working with Chris.

Terri: “I’m competitive and there is an excitement about tournament play that is on a different level than open play. It is fun to play and be around others that are just as competitive. I was excited about about placing, especially since there were so many good players. Shortly after receiving the medal I was looking into next tournament. Seriously, we were still packing up our things and already talking about the next tournament!”

Christine: “It was really exciting to get the silver metal. Terri is a fun partner and she has great serves and shots. I’m excited about the match we will play together [in our next tournament] in November – goin’ for the gold!

All the support and guidance from “Coach Chris” is an asset to the Elite pickleball program. I don’t think I would be as motivated or invested in the sport without all that he has set up to help the players and the program be successful.”

Do you have a success story similar to Christine Laemmar-Faber & Terri Spivey? We want to hear about it! Whether you’re learning pickleball with Chris Amidzich, training for a marathon, have a weight loss story, or anything else you want to share, you can fill out the form below.