When I mention the word boxing, what image comes to mind? My guess would be two sweaty guys trying to pound each other in an attempt to earn the right to call themselves “the best.” You may imagine broken noses, cut eyes, foreheads not unlike that of a Neanderthal. In fact, I would bet that what you imagine would so turn you off, that you would almost NEVER consider boxing as an alternative to riding the elliptical for an hour, but… If you will give me a couple minutes, I will make you see that boxing may be one of the most effective weight loss tools in the fitness club arsenal.

People who try boxing are always surprised to find how their body changes. First, they notice their arms becoming stronger. Then they start to see their waist line get smaller. Their legs become toned and stronger. They notice a chiseling effect on their body that they had never seen before. While these reasons may be enough for most people to try boxing, the best benefits don’t occur in the body, they occur in the mind. Self confidence grows and becomes stronger. Boxers find themselves becoming more balanced, and gain a sense of inner strength. Boxing does more than just get people in shape; it helps them release aggression. It gives people an outlet that no other form of exercise does.

Did you know that your favorite star likely uses some part of boxing to look good enough to be in the movies? Matthew McConaughey, Gwen Stefani, Marisa Miller, and Nick Cannon use boxing to stay in shape. Many professional athletes also use boxing to cross train for their event. In the June 23, 2010 edition of the Milwaukee Journal Sentinel, Charles Woodson; a star cornerback for the Green Bay Packers, cites boxing as a reason for him coming into the season in such fantastic shape.

So why do these celebrities choose boxing when there are so many different forms of exercise out there? Boxing can burn from five hundred to one thousand calories an hour! (depending on the weight of the individual doing the exercise, and the type of boxing i.e. sparring, bagwork, shadow boxing, etc.) It also utilizes a form of exercise known as interval training. Interval training is a type of training during which you exercise at your absolute maximum for a short period of time, recover for a smaller period of time, and then repeat. In boxing you go hard for three full minutes with a one-minute rest in between. Some studies have shown that this type of exercise actually burns about twenty percent more fat than straight cardio. 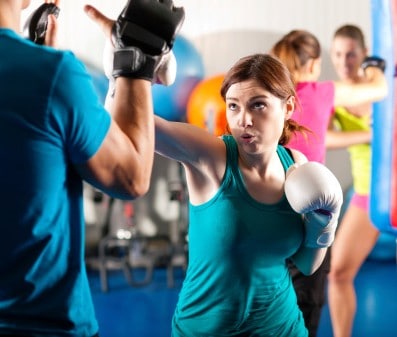 Generally speaking, if a club has a heavy bag, they will have gloves or something else for you to protect your hands while you work out on it. However, if you really want to enjoy this amazing form of exercise, I recommend you buy your own gloves. Training gloves come in many different forms, but the biggest thing to remember is the weight; the heavier the glove, the harder the workout. Gloves generally range from eight ounces to as much as sixteen ounces. You can even buy gloves with weights in the wrist for shadow boxing. NOW… imagine throwing punch after punch for two to three minutes at a time with only a short rest in between each round, and do it all with an extra pound on each hand. That is quite a workout! Other tools you could use include hand wraps, jump ropes, floor-ladders, bob and weave ropes, medicine balls, etc. There are several types of hanging heavy bags as well, but generally speaking, you will only find them in boxing-specific clubs.

Most people’s first, and strongest reaction to boxing is; “I don’t want to get punched/hurt.” Boxing, like any other form of strenuous exercise, is safe as long as you have an experienced instructor. Boxing is very “form” sensitive, and for that reason the best teacher is someone who has some boxing time under his/her belt. Most of the time, sparring is an elective, and will be left up to the individuals. The only time it is not optional is when you are in a boxing-specific gym. The most common injury in boxing is wrist injury, however wrist injuries occur for two very specific reasons, both of which can be avoided. First, learn to wrap your hands well. The wraps should be tight, but not cutting off circulation. Second, you have to learn the proper form for striking something with force i.e. palm down or palm in, straight punch, or elbow up. These are some of the things that an experienced instructor can watch for and help you with.

People who exercise by using boxing will become stronger, faster, more confident, and not to mention that they will be practicing some real world self defense. They will experience the health benefits that come from regular exercise as well as experiencing the strength gains that are usually only associated with resistance training. Tennis, baseball, and golf are just some of the cross over sports that will improve with boxing. Lastly, and probably most importantly, boxing is a blast!

So, when you hear “boxing” what image does come to your mind? Would you ever consider incorporating boxing into your regular exercise regimen? Tell us in the comments!