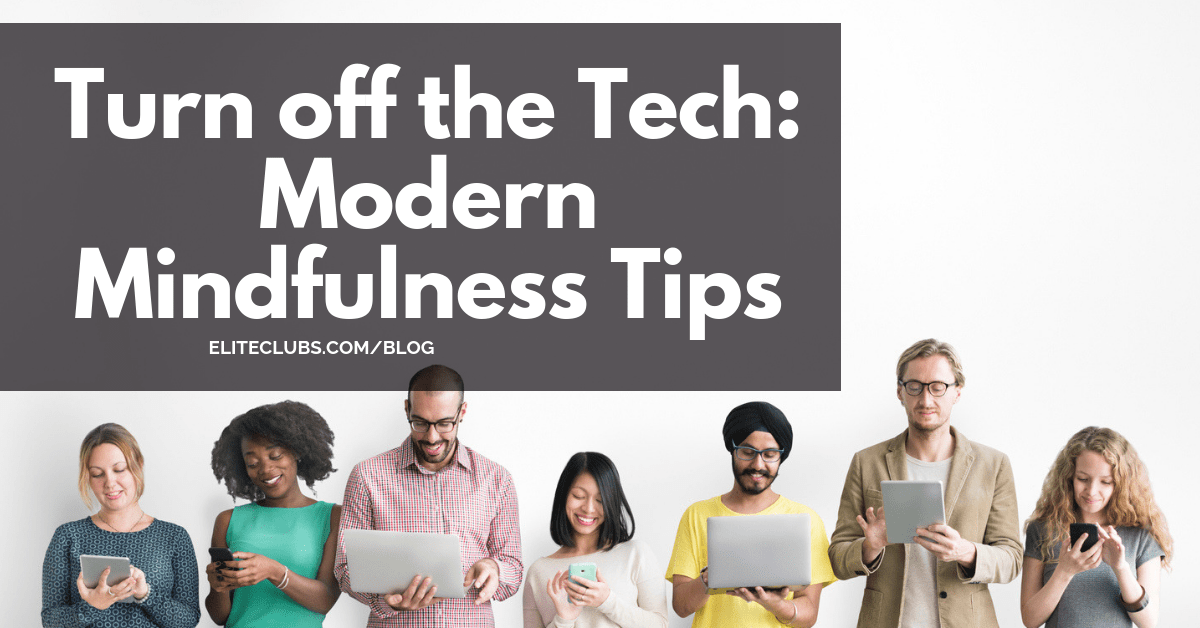 Modern technology and daily stressors seem to pull our attention in ten different ways at once. It’s easy to get lost in a social media newsfeed, read a succession of blog articles, or get hooked on Youtube videos or Netflix episodes. What better way to avoid the temptation by eliminating it altogether! Limiting your and your family’s screen time will help you focus on the present and be more mindful of what’s going on around you. Here are some modern mindfulness tips with regards to technology.

The first step to reducing the amount of screen time is to actually measure your weekly time spent on your phone, tablet, computer, or TV. For some, this may be as simple as setting a stopwatch and journaling how much each day. While this isn’t realistic for most, thanks to other mindful developers, there’s also an app for that.

For example: the latest iPhone and Android operating systems come with built-in features that track the amount of time spent on your devices in certain apps. These features also allows you to set limits on the total time you spend on your phone, or down to a granular level, like which apps you want to limit. If you have a linked family of devices, you can also track and limit the amount of screen time your kids have as well.

If you feel that this may hinder your productivity, you can turn off the distracting apps like social media and news, and allow access to ones necessary for work, school, etc.

Schedule Downtime into Your Calendar

One of the best ways to avoid the temptation of screen time is to actually schedule activities that don’t require technology. Whether it’s a few hours a day or a few times a week, getting away from screens will help your mind relax, help you think clearer, and allow you to be in the moment. Schedule a walk around the neighborhood to take it the sights. Go to the club to socialize with friends or get in a good workout. Meditate or practice controlled breathing to bring attention to your thoughts.

There’s No Such Thing as Multitasking

A common misconception is that technology helps us with multitasking, which allows us to be more efficient. Well, it’s time to quell that myth. According to numerous psychologists, there’s no such thing as multitasking, at least not in the way most people think of it. Can you walk and chew gum at the same time? Yes, most people can because the activities are automatic and don’t require thinking. When two tasks require the same brain processing, such as reading and listening to music at the same, the tasks interfere with one another. “Multitasking” as we call it, is actually just the rapid succession of switching from one task to another. Even though you think you’re typing an email while talking on the phone, your brain is actually rapidly switching focus between the two tasks because they both involve the processing of language. In fact, the American Psychological Association has published studies that say “multitasking” hinders efficiency. It all depends how familiar and well-practiced the task is.

So the point being, focusing on one task at a time will not only make you more productive, it will also encourage you to get rid of technological distractions.

Technology is often necessary on a day to day basis. But leaving your phone behind, intentionally turning off the TV, and scheduling downtime will help your mindfulness improve. For other blogs on how to improve mindfulness, subscribe to our weekly blog digest!