Staying Active to Enjoy Hobbies Like Skiing with Family 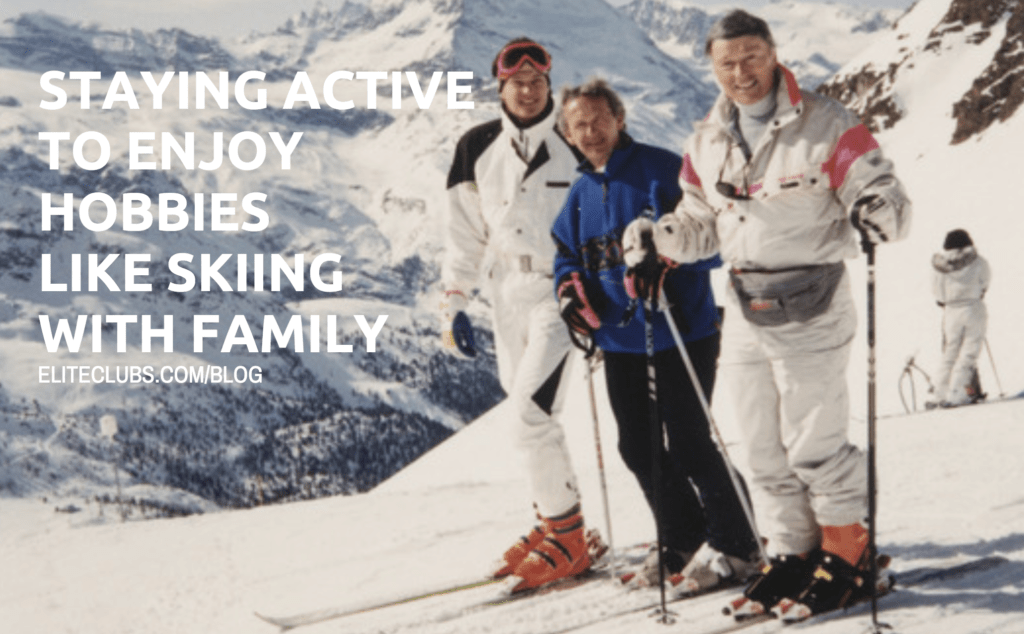 Walter Regal and his family have been members at Elite before it even was Elite. They were members 20 years at the Mequon Racquet Club and another 20 years at Highlander, now Elite Sports Club-Brookfield. Walter has managed to use the clubs regularly enough to maintain his fitness levels allowing him to continue with his recreational activities, such as tennis and skiing.

Elite has been Walter’s club of choice for a good portion of his life because he lives so close to the club that he can simply walk to it, needless to say it’s a very convenient location for him. Often in the winter he’ll even shovel a path in the snow to get to the club.

Exercise plays an important and constant role in Walter’s life. “I try to workout every second day. And play tennis.”

It’s by this set routine that Walter manages to stay fit and healthy as he gets “up there” in age. “I exercise to stay in shape. I go through about 20 machines, which usually takes a couple hours to finish. 30 minutes of cardio, and then I go through the weight machines. I just try to stay active.”

Walter is “older” but still very active. “I’ve always exercised, even when I was a little kid. We didn’t do any ‘exercises’ per say, but we went jogging and swimming.”

Exercise has always been a part of his life. “That’s just the way it was. I’ve just always liked to exercise.”

Walter grew up in Germany, and when he was a teenager he immigrated to the U.S. Two years after he came to the states, he was drafted into the army. He was able to attend engineering school through the army, and then was sent back to Germany as an interpreter for the battalion.

Once Walter returned from Germany the second time, he became the builder he always wanted to be. “When I came over here, I worked as a carpenter and at night I built houses with a friend of mine after work, every night, even Saturday and Sunday. I got home at 10 o’clock. I lost about 25 pounds that summer! A lot of hard work, but I wanted to make money you know.” Although he started off small, he eventually went on to join the Metropolitan Builders Association and become a builder himself. He has since built hundreds of houses and apartments, some of which are right next door to the club!

“I quit building for others when I was about 48, but I kept on building for myself though.” Now Walter’s son primarily manages the building projects, freeing up time for Walter to enjoy some of his other hobbies, including tennis and skiing.

“I’ve done a lot of skiing, I’ve skied all over Europe. I started skiing when I was just a little guy. We had little hills near where I was born, but not really any big ones.”

“Then when I came over here, I went skiing at Little Switzerland all the time. My son was actually a ski instructor, but gave it up once he had kids. He is really a good skier; he raced through high school and college. My daughter is a good skier too. I started taking them along when they were only 5 and 3 years old. My grandson has picked it up too; he’s also racing now.”

Walter returned to Europe to ski with a ski group he was involved with based out of Detroit; he also skis with his family in Vail where he built a house about 20 years ago. He says his family really just skis for the “fun of it,” and that it’s more about enjoying themselves, the scenery and fresh air.

In recalling his trips to Europe he said, “We’d go on these ski trips with a group of people from all over the United States, we’d ski over there for two weeks, hitting every hot spot in Europe—France, Switzerland, Italy, and Austria. Vallée Blanche in France is one of the most beautiful locations I’ve ever skied in my life. It’s scenic, it’s all glacier, and you have to ski through and walk up crevices. You
go over snow bridges too. It’s not really hard skiing, but it’s scenic.”

When asked what he saw himself doing 5 years from now and if he’d still be at it, Walter said “I hope so! You never know. But I think that working out and having my routine has helped.”

He explained that the great thing about sports like skiing and tennis is that you can be competitive when you’re younger, but as you get older you can continue to enjoy it, and you don’t have to stop just because you aren’t doing it competitively anymore.

Walter recalled someone he came across while on a ski trip, “I met a guy up there at ‘Two Elks’ one of those restaurants at the top of the mountain, the guy was 92 years old. He couldn’t walk that well anymore, but he was pretty good on
skis!”

And we expect nothing less from Walter!