Member Stories: Tim Stark "When I retired, I wanted to do something big" 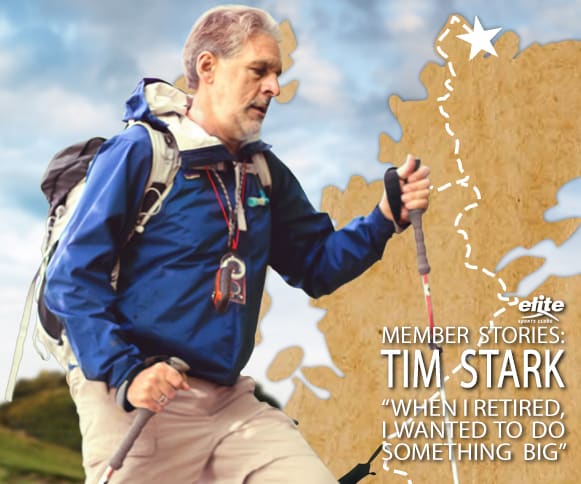 This story originally appeared in the Fall 2014 edition of our seasonal magazine.

“When I retired, I wanted to do something big.” Tim Stark, a veteran marathon runner and Elite Sports Clubs member, took his retirement plan to a whole new level and walked across Scotland in the fall of 2012. Having accomplished such a feat, Tim has acquired a few meaningful philosophies on maintaining one’s health and fitness as a means to better enjoy life.

Tim and his family have always been active. “We have always been workout people. Elite has been great. It’s been a good fit for us.” Patty, his wife, has been a member at Elite for about 20 years and got Tim to join Elite two years ago. They both like to work out in the early mornings at Elite. The aspect that keeps bringing Tim and Patty back to Elite, is the people. He raves about how friendly and personable the people are at Elite. Being a “people person” himself, Tim says its enjoyable to be surrounded by people who will chat with you while breaking a sweat.

After multiple knee surgeries, yet still an avid runner, Tim usually goes for runs in the morning and uses Elite’s facilities for the bulk of his cross training and weight training.

Tim and his wife Patty, have always loved to travel, and their teaching careers have given them the time to do so. “Travel is a real love of ours,” the former teacher said. Tim, along with his wife and two adult children have conquered most of the United States and much of Europe. In fact, it was the combination of his family’s love for travel, his passion for working out and staying fit, and a book he read along the way, “A walk across France” by Miles Morland that cultivated his desire to walk across Scotland.

He chose Scotland for two main reasons; one, they spoke “somewhat English” and two, they had a great Sherpa service. A Sherpa service is a company or group of people that will take your luggage from destination to destination for you while you travel. In Tim’s case, they took it to and from each predetermined Bed and Breakfast along his route. A quality Sherpa service is hard to come by in the states making Tim’s decision to go out of the U.S. that much easier. His scheduled route for the Sherpa service was a way of motivation for Tim. He had a goal for each walking day; to make it long enough to reach his belongings. 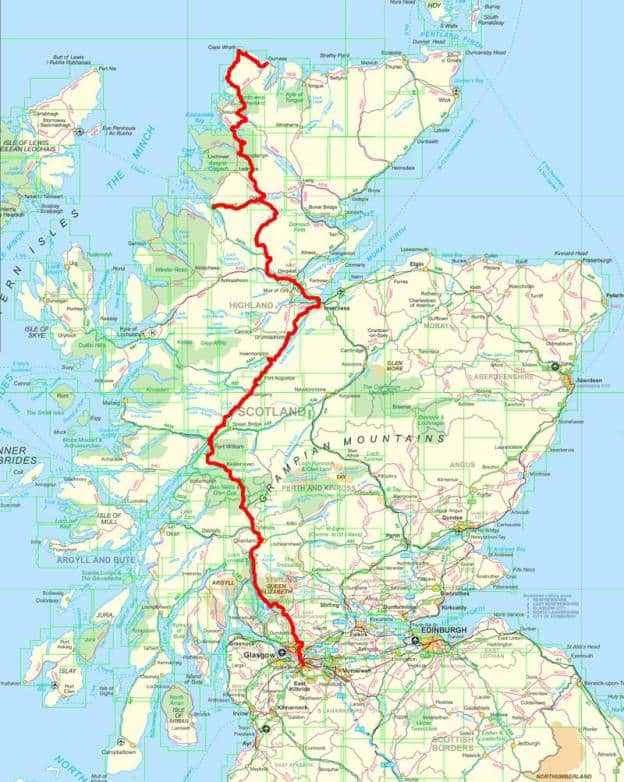 Through extensive research on his exact route through Scotland, Tim walked from the Southern tip to the Northern tip, from Hadrian’s Wall to the Inverness Tip. Walking approximately 20 miles a day, it took him about three weeks to complete.

The first day of his journey was not short of symbolism. That day was also when school started at his newly retired place of employment. While the Mequon school hallways were filled with eager students and teachers, Tim began a journey he will never forget.

Tim took every stride with absolute positivity and saw everything about his experience in the same light, especially the weather conditions. He described them as, “amazingly horrendous,” referring to the huge amounts of rain that happened almost daily. The rain was the heavy, pouring, “cars had to pull over and wait for it to pass,” kind of rain. He was ecstatic to learn most of the Bed and Breakfasts had a specific room to dry clothes and other wet belongings. 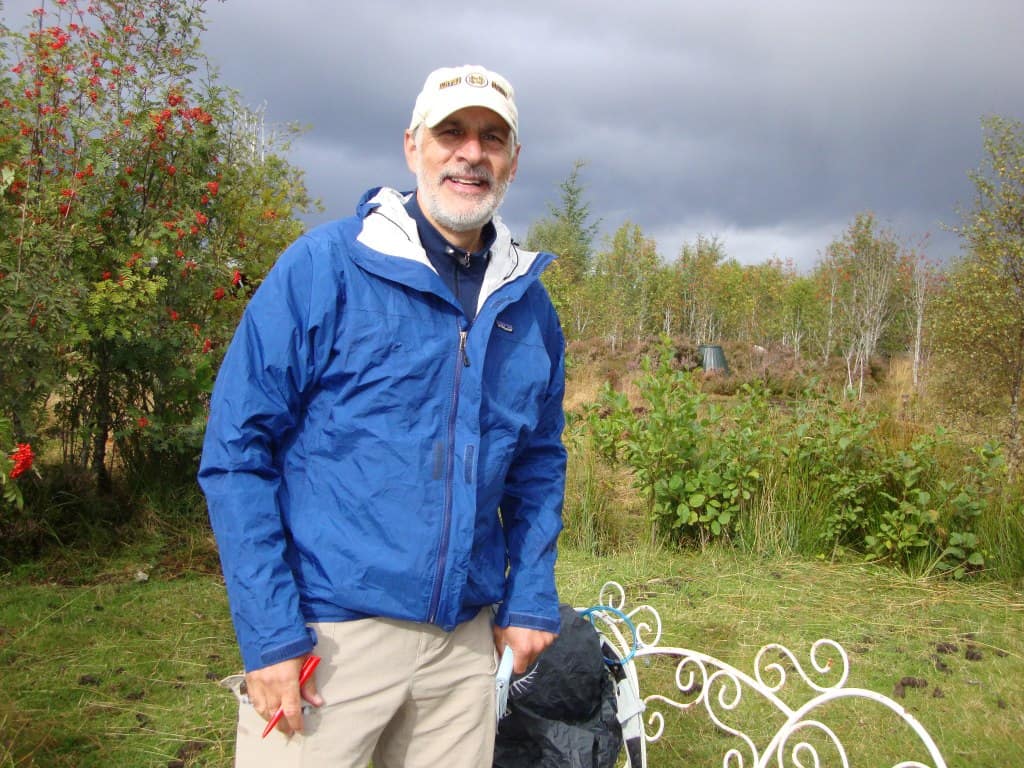 He described the villages he stayed at every night as, “tiny, tiny towns.” Most of them had zero internet access but when Wi-Fi did appear, Tim took advantage of it and sent a quick message to Patty to say, “Yes, I got to this place safe.” Patty must have been very reassured with such a lengthy message.

She had no reason to worry though. Tim said he met many friendly people in the villages. Some spots along the trails really had its perks with something called an “honor bar.” These were set up for walkers, like Tim, that provided different kinds of power bars if needed. The routes were very well maintained by the Scottish government.

Tim didn’t spend much time staying in the villages. They were solely for the purpose to rest, eat, and try to dry his soaking clothes.

“There were times in the evenings when I didn’t even go out for food because I was trying to keep my feet rested for the next day.” He talked about his feet getting shredded from some of the rough trails, “that was hard to train for.”

His overall trip was illustrated as a “healthy, wonderful experience.” When walking both the West Highland Way and the Great Glen Way national trails, Tim had no music or headphones. This escalated the “Zen” and mediated experience. It gave him time to think and reflect on his past, present, and future. “Our modern culture, in the western countries…We’re constantly being bombarded with media or people…how often are we ever alone? It’s almost never.”

After he came back from his uplifting trip, and a short one year teaching contract in a 4th grade class, Tim has plans to go again. This time he plans on walking across England, from the western coast to the eastern coast. He anticipates the walk to be harder than the first with various sections of mountainous terrain. His plan to train for this trip will be slightly different and more aggressive than the first.

For his upcoming walk his workout regime is the same as his usual routine at Elite, cardio and weights. For this more vigorous route, he also goes to the Ice Age Trail and hikes.
Tim is looking forward to the more difficult route because of his love for working out. “I have to work out every single day. I get grumpy if I don’t.” Tim explains his happiness and energy comes from working out, and Elite gives him access to exercise and stay fit whenever he wants. “Americans say working out makes you tired, but what it really does is energizes you.”

Through all of Tim Stark’s experiences, his final word on how to incorporate fitness into traveling, your family, and your daily life is: “You have to make working out a go to. As they say, go big or go home. Do everything you can while you are healthy enough to do it.”

UPDATE: Since this article was originally printed in the Fall 2014 issue of our Elite Life Magazine, Tim has safely returned from a successful trip in England! He said it was definitely tougher than his Scotland trip, but he made it back safe, and is back at it at the club.

Check out some photos he sent from his trip on our Facebook page!

Tim Stark, a member at Elite Sports Club-North Shore, was our cover story for the Fall 2014 issue of our Elite Life…

Have an exciting healthy story of your own to share? Submit it here and you could be featured on our blog!