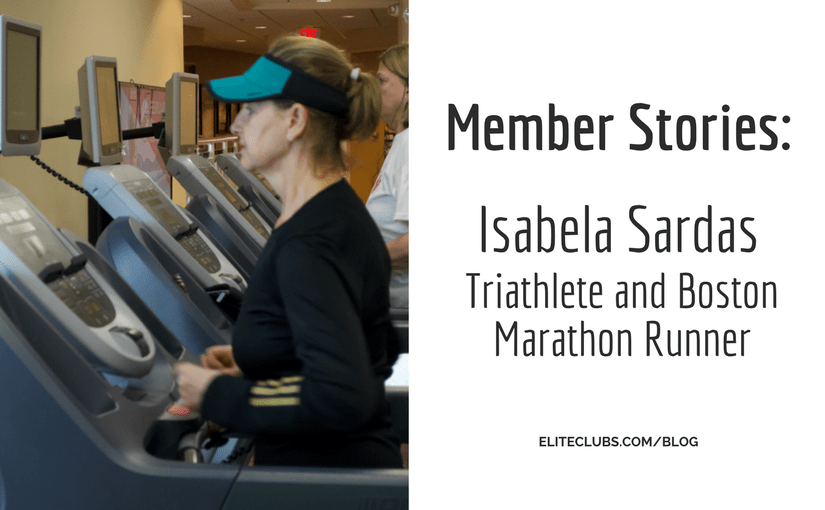 Isabela Sardas and her family have been members at Elite Sports Clubs since the day the pool opened in Mequon. An avid swimmer and runner, Isabela used the clubs to train for triathlons and marathons. Since 2008, Isabela has run 17 marathons, including the Boston Marathon 5 times. Even though she doesn’t run them as frequently anymore because they’re so physically demanding, she still finds the time to run about one or two a year – still an impressive feat. Read more to learn about her story.

Each member of Isabela’s family found something they loved to do at Elite Sports Club – Mequon. Her husband, Ken Trevorrow, was an avid tennis player. He was part of a tennis group every Wednesday and Saturday at the clubs. Isabela played some tennis with Ken, but typically trained for triathlons by utilizing the treadmills, pools, and spin bikes. Ken’s love of tennis inspired their children to take tennis lessons starting at a young age. Likewise, Isabela’s love of swimming prompted them to take swim lessons here at the club as well. As Isabela says, “we used every aspect of the club.”

Ken was born with cystic fibrosis and required a double lung transplant about 17 years ago. As a result of his transplant, Ken needed to take immunosuppressive medication for the rest of his life so his body wouldn’t reject his new lungs. Unfortunately, with taking these medications comes a greater risk of developing cancer.

The Sardas-Trevorrow family’s world was turned upside down when Ken was diagnosed with lymphoma in March 2017. It was a particular type of lymphoma called post-transplant proliferative disorder, which is a blood cancer that can develop after an organ transplant. He received treatment and was in and out of the hospital for many months. Sadly, Ken passed away in October 2017.

During and after the family’s struggle, Isabela Sardas became involved with the Leukemia & Lymphoma Society, which is an organization that is dedicated to finding a cure for various types of blood cancers as well as to provide support to patients and their families. Through their fight, Isabela discovered that LLS not only supports patients and families with resources, but also they help them get access to treatment. Isabela says, “I’m not sure how many organizations do that, but I find that to be a very positive [aspect] about them.”

Given her experience running marathons, Isabela has decided to run the Boston Marathon yet again in 2018 with the help of LLS’s Team in Training. They support athletes training for fundraising challenges in the effort to raise money for cancer research. Team in Training ensures the athletes have everything they need to be ready for the events/races. They provide connection to training coaches, develop a training plan, and check in to prevent injuries. Essentially, they’re there to make sure you’re training in a healthy way because not everyone has experience participating in such events. Isabela says, “It’s always nice to have people looking out for you. Even as an experienced Boston Marathon runner, there’s always something new you can learn learn and it’s nice to have that comradery.”

Many charity groups are involved with the Boston Marathon, each with their own cause. The runners are often required to meet a minimum fundraising goal in order to participate. In Isabela’s case, her involvement with LLS was a great opportunity to run in honor of Ken and to raise money for blood cancer research.

In addition to running the Boston Marathon, Isabela is set to ride in the Scenic Shore 150 Bike Tour on the Elite Sports Club – Mequon team! The event is a 150-mile bike ride along the coast of Lake Michigan in Wisconsin. The bike tour is also put on by the Leukemia & Lymphoma Society. Riders raise money prior to the event much like the Boston Marathon. Volunteers and donations are also welcome.

Isabela Sardas is hosting a tennis mixer at Elite-Mequon on Sunday, April 8th, Ken’s birthday, in honor of her husband and also to raise money for LLS. The tennis mixer will be set up in a round robin format and promises to be fun for the whole family. The public is invited to come in and learn about LLS, donate to the cause, and have lots of fun! “Ken loved to play tennis.  Even through all his illnesses and all his struggles, tennis is what kept him going.”

Isabela is generally an independent person, but through her family’s struggle she found immense support from family, friends, and the Leukemia & Lymphoma Society. “Asking for help when you need it is really important. I’m always wanting to help other people so to ask for help was hard. But it was nice to have that support and we made some really good friendships.”

Isabela Sardas is continuously finding ways to give back to the community and organizations that helped her family through their difficult times.

Do you have a story to share? We’d love to hear it!