How Cyclists Can Benefit From Yoga 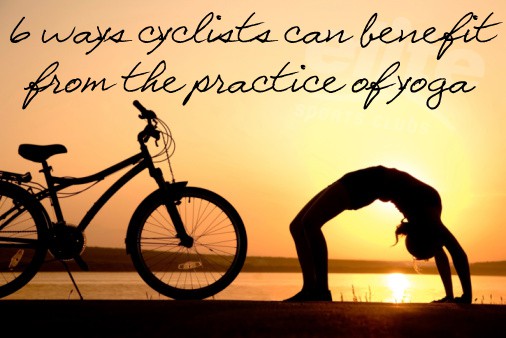 Awhile ago I read a long article on yoga for cyclists I decided to rewrite my own version in a shorter format for this blog, as it very beneficial to our members who ride both in and outdoors. Hope you enjoy it!

6 ways cyclists can benefit from the practice of yoga:

One of the major benefits of a regular yoga practice is improved strength and endurance. It can help strengthen the places that get too weak when spending too much time in the saddle. Areas like the back, core, and upper body can often be underdeveloped in cyclists. You may feel powerful on the bike but try a yoga class and you will notice weaknesses in some of the stabilizing muscles like those in the ankles, hips, and groin; all very important to cyclists.

With yoga comes better flexibility. Yoga brings flexibility to the areas that get too tight so that you can have a more fluid pedal stroke. Cyclists tend to have tight hips and hamstrings in particular, but can also suffer from tight backs. Holding your position for a long time saves time by not having to get off the bike to stretch in the middle of a ride or a spin class.

Some of the non-physical aspects of yoga, such as mental focus and breathing, can be just as important to cyclists. You will notice the benefits of proper breathing on the bike. Whether you’re in a race or out for a weekend ride, staying calm with breath work and relaxing your shoulders are the fundamentals of a yoga practice that are really applicable on the bike. From doing yoga, your body is used to being stressed but remaining calm. Holding the yoga poses is like climbing a big hill, it requires focus, endurance, and the understanding that you might feel like you’re going to lose it! But, if you hold it just a bit longer, you can reap the benefits.

Injuries often plague cyclists but all injuries are a result of some sort of imbalance. For example cyclists often have weak backs and sometimes weak cores as well. Cyclists also tend to have underdeveloped upper bodies, and even right and left leg imbalances can cause inefficiencies in the stroke. All of these imbalances can result in overuse injuries in the stronger part of the body that are picking up the slack. Cyclists tend to get so focused on their bike instead of their whole bodies, it’s easy for cyclists to forget about their upper bodies, but having a strong core is essential to cycling. Not only can yoga help prevent overuse injuries, it can help if you fall off the bike as well.

Cyclists should integrate their yoga practices with their training. The physical intensity of a yoga practice needs to be an inverse proportion to wherever you are in training. In other words, in the off season yoga can be used as a workout to build strength, whereas during the peak season it should be used as a recovery tool. Yoga is great for working out tightness and erasing muscle memory of bad habits developed in the saddle. Use yoga as a maintenance and recovery tool to relax the body and the mind.

Most cyclists are very competitive and leaving the competition outside the yoga studio is very challenging. The dynamics of yoga will help you find balance in your life, it’s a good counterpoint to cycling. Yoga is good practice for living your life how you want to live it, not comparing yourself to others. It’s nice to feel like not everything is a competition. Most importantly, know your limits! Pushing yourself too far in yoga can cause injuries, so it’s a very real danger to bring that competitive spirit into the studio. So, as we often say, “check your Ego at the door!”

So, How Do You Get Started?

How do you find a yoga class that’s right for you? Keep trying classes until you find one that works, it’s like comparing different yoga styles to shoes; some brands work, some don’t. (Check out our 5-club online yoga & pilates schedule!) Go with a friend and find a good beginners or hatha yoga class, don’t hop into some intense power yoga class the first time. As cyclists, or anyone for that matter, we are used to being the best at what we do. But yoga is about yourself, your ability and your personal challenges.

The stereotype that yoga is just for girls who want to stretch needs to be wiped away. It’s one one of the harder workouts that you will do. You get out what you put in. You will get stronger, you will get faster, and you will become more flexible. Men just have to get over being the “only guy” in class at times.

Once you get past learning the poses and the soreness, you will leave every session refreshed. It’s mental clarity and physical effort. What’s most important is going in with an open mind, not worrying about being judged and having fun!