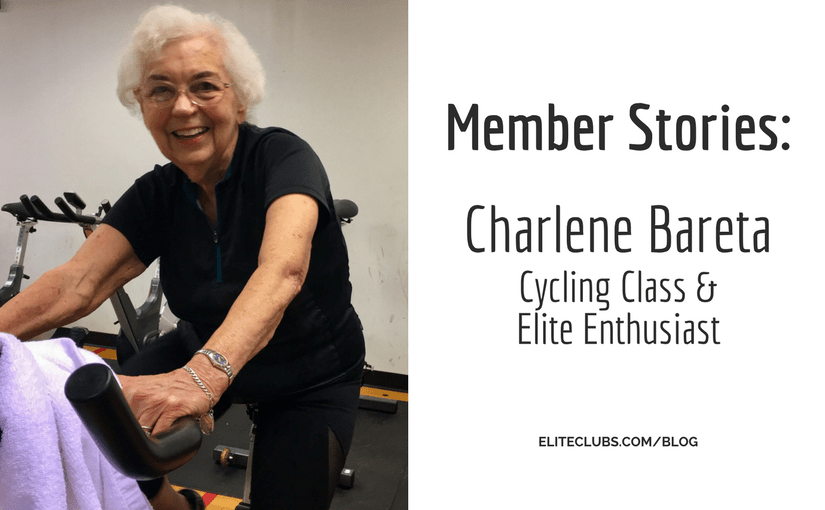 Charlene Bareta had always been active in her life, she recounts – maintaining her athleticism and herself through dance, cheerleading, and biking. Fast forward a few decades and she has not been able to enjoy her active life like before. However, she heard about a new club that Kay bought. Given her past interests and activities, she wanted to see what this club had to offer. The club opened in 1986. She joined the following year, in her late 50’s.

When Charlene initially joined, she knew she wanted to focus on aerobics. So, she started out by coming with her husband in the mornings and she did step aerobic classes. Unfortunately, she had to take off her glasses during class, and as a result she kept stumbling and hurting herself. It wasn’t too long before she got fed up and asked Kay: “What else you got for me?”

The club started offering cycling classes. In her youth, Charlene was always on a bike so, she decided to give it a shot, as a last resort for staying with the club.

“The spin room used to be right across from the S.M.A.R.T. Clinic in the corner. We went in there and Laura fixed me up with a bike. At the beginning I kept slipping off. I lowered the seat down and I have been on it ever since. Some people kept saying that my seat was too low, but it was perfect for me,” recalled Charlene.

She never liked the water or any other aerobics besides cycling. For anyone in their middle age, cycling is an excellent exercise because of its low-impact on the knees. For her, this was just a bonus because she possessed (and still does) a passion for it that outweighs any other benefits. She has remained a member at Elite and is just as active as when she started. Spin is the primary reason for her staying.

Apart from the cycling classes she does other classes as well. She maintains her youthful spirit with a myriad of classes — She used to go to spin as much as 5 times a week, but now she also likes to do Zumba and barre. Her husband sparingly joins her, and she supports his workouts on Sunday mornings by going with him as well. This active lifestyle and support speaks volumes about her as a person and athlete; coming into the club nearly every day of the week. However, she warm-heartedly explained that even though she loves the club, “everyone needs a day off to relax.”

Charlene joined Elite back in 1987, and she had a working life prior to that. Whenever someone re-engages their body to working out again there are aspects in that particular person’s life that change, primarily for the better. Perhaps it can be considered an evolution of lifestyle.

There was a long while that she was not on a bike. And at one point during that time, a self-defense instructor told her that he found a lot of youth in her, and that complement has kept her going all these years. She recently turned 88 and still maintains her warm and youthful spirit. Susie, one of her spin instructors, refers other members to her who are intimidated in trying spin, she gives them a pep talk and it never fails, they try the class. Charlene says to them:

“The instructor may be yelling at you to do something, but listen to your body. Go at your own speed and build yourself up. Do what your body can do.”

She recalled a time where she broke her toe and had to adjust her whole routine. “I let my foot recover for a while and let my other foot do the work. A month passed, and I got back into the class.” 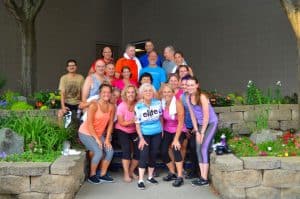 Charlene is known to wear her Elite cycling jersey whenever she comes to class. She has two of the cycling jerseys and recently won the 30th anniversary shirt, which is quite a meaningful accomplishment considering she has almost been here for 30 years herself. Charlene has acquired other Elite gear over the years through contests. She doesn’t consider herself a good winner because of her spinning abilities, but rather how often she participates, a matter of basic probability. “I win not because I’m a great spinner, but rather because I am persistent and come so much. It’s a great group of people here and it really feels like home here. Everyone knows your name, especially mine, but I may not know theirs!”

Recognizing that she has maintained her active lifestyle at Elite, one would think there is some sort of special place for her in the hall-of-fame of Elite. She does have a special place at the club, she has her own special bike for spin, and other members know it too! “The bike is in the middle of the room in front of the instructor. I am hard of hearing so I remove my hearing aids and being apart from the speakers helps me a lot.”

She also possesses no shame over sharing a humorous story from her earlier spinning years. “There’s a funny story about my bike too. Before, the club had different bikes but when they changed them, they had different clips. When I trying to get into one, Tony got me in. But then I couldn’t get out so I had one shoe off the bike and Tony got on the ground to help me get the other foot off [laughs]. Because not all bikes have clips that work with every shoe, that specific bike is mine so I don’t have that problem again.”

Having her own bike is a clear indication of how much she prizes spin as a class. She states:

“It’s fun! It’s a great exercise and you really burn the calories. I love to cycle and I don’t have to worry about navigating anywhere or avoiding cars.”

Charlene is actively engaged in recruiting new members to classes too. She recalled a particular time when one of her favorite classes was in danger of being cancelled. She got very upset and went out to recruit people to go to the class. “It was important for me to save the class because Steve, the instructor, has a certain way of teaching that made me improve so much.” Steve gives a bit more incentive and she said she really improved. She claims that he is a little rough around the edges but at the same time, a great teacher.

Over the past three decades, Charlene Bareta has proven herself an enthusiastic member who goes above and beyond to welcome other members to the club and classes. She is a beloved member, with a great sense of humor and is an inspiration to us all. Thanks for truly exemplifying what it means to be “ELITE”
Charlene!

This article originally appeared in the Fall 2017 issue of Elite Life Magazine. Have your own “elite” story? Share it with us!