A Family Affair: New Dynamic on the Tennis Court for Mom, Dad, and Daughter 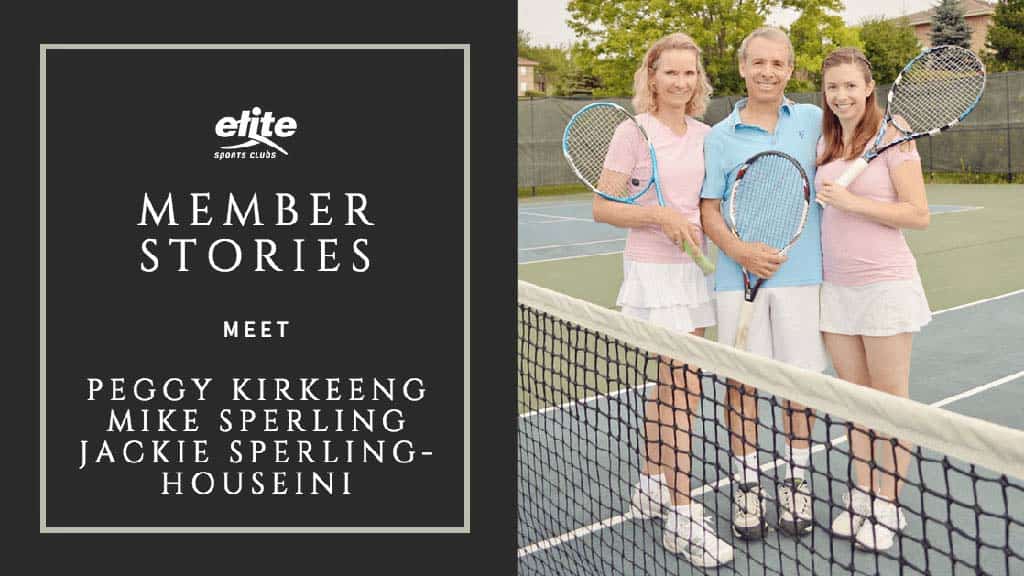 Mike has been a member since 1982, and Peggy since 1981. Peggy and Mike actually met at the club. They were set up on a blind date by a state league teammate, and they had their first date at the club on the court.

“I was trying to tire her out. I was running her side to side. But I couldn’t wear her out,” countered Mike.

Mike started playing tennis when he was 14 years old. Peggy started at about the same age, just hitting up against a wall. And that being the “magic age” for the family, Jackie also picked up tennis around 14 years old at Homestead High School when she tried out for the team.

Jackie didn’t always plan on playing tennis, even with the strong example set by her parents. But after seeing how much fun her friend had on the high school varsity team, she made JV2 her freshman year and worked up to varsity the next year. Her parents played with her throughout the year to help her get better. 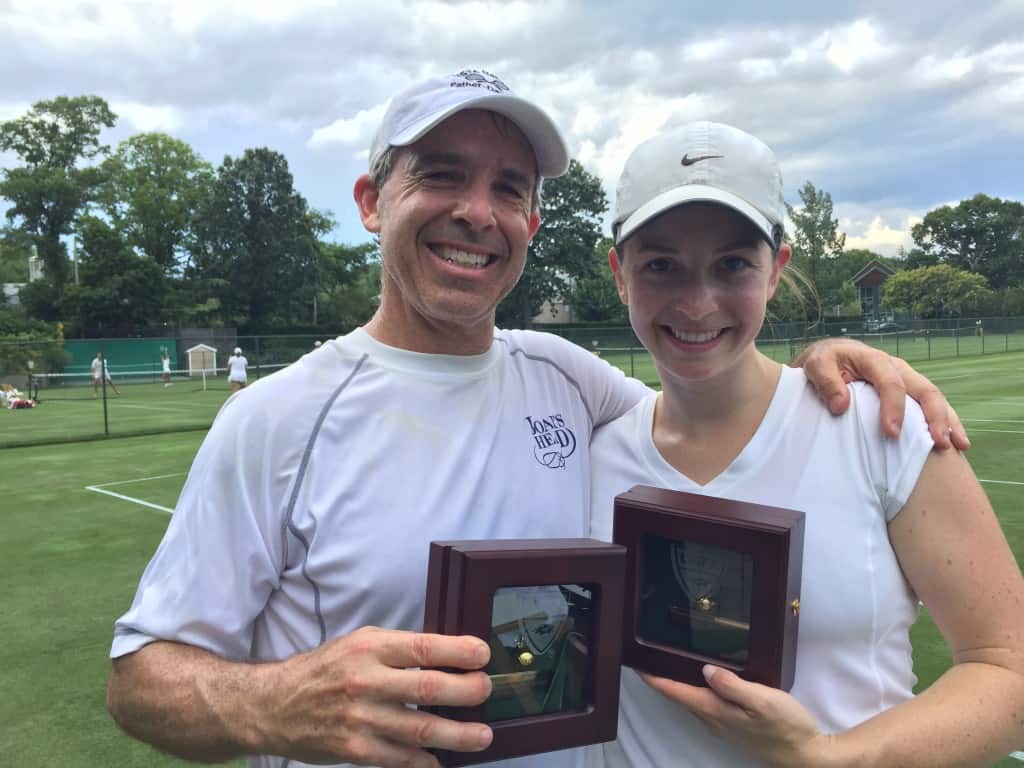 Mike and Jackie started playing in national tournaments on the Father/Daughter circuit in 2004, getting their first bronze ball in 2010, just after Jackie finished playing her last year on the team at the University of Minnesota. But the family tennis affair started far earlier, with Mike and his own dad, who played Father/Son tournaments for 35 years. Mike and Peggy also play Husband/Wife tournaments.

“I figured I was about the only guy in the country who was playing with their dad, their spouse, and their child.”

Jackie and Peggy started competing together in 2012. They have played in four competitions nationally, winning two of them.

“For me, there was a little bit of a mental component to learning how to compete and not get nervous. I get advice from a coach on how to focus, and it begins with preparing off the court. Thinking in your everyday life, and visualizing, using positive self-talk,” explained Peggy.

The true challenge, however, came when Jackie’s skills started to catch-up and even exceed that of her parents’. Suddenly there was a shift in who was “in-charge.”

Peggy described the shift in dynamic on the court and how it affected their game. “I got advice from Rick Vetter, he knew Jackie because he coached her at Homestead and gave her lessons. And I was saying to him, ‘Rick, I don’t know what to do, because all these years I’ve been the mother, but on the tennis court she won’t do what I think we should do!’ Rick put his hands up and said, ‘Peggy, I’m going to tell you something, you are no longer in charge of Jackie, she’s a lot better than you. She’s in charge.’ So, that was kind of a monumental moment for me. But at times I’m still the mom, if she needs something to eat or if she’s injured. But by and large in terms of strategy, she’s in charge.” 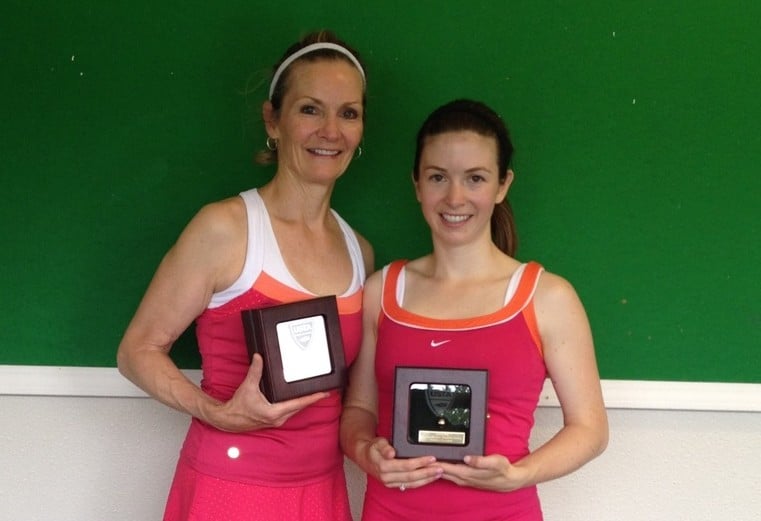 Mike’s experience with Jackie was similar. “Well, it used to be that I was telling her what to do because I’d played so long and was the doubles player, I played at Wisconsin in college. And Jackie, she was a bit of a late bloomer. But it’s more even now. We’re both suggesting things for each other to do.”

Peggy went on to explain how the tournaments have also affected her relationship with Mike, “Working out who is going to be in charge is a little more difficult in Husband/Wife matches though. Mike’s the expert, without him I wouldn’t have come this far, but I definitely have ideas as to what we should both be doing. So, it can get contentious, but we try to infuse humor in it. We’re always working on that, it’s an interesting dynamic.”

The family participates in Elite’s Unlimited Tennis program, which they each take full advantage of, getting on the court 5 or 6 days a week. And somehow they find the time to workout too. Peggy enjoys step, sculpt, and pilates classes with Cate Charlton. They also bicycle too, Peggy and Mike a bit more than Jackie. Peggy and Mike are going on a bike trip to Spain in October, and they’re doing an organized Door County Century Ride in September. Peggy also does yoga twice a week, and Mike once a week, Jackie does it periodically as well.

“I think that as you age, the cross training is really important for tennis. We’re working on injury prevention all the time,” says Peggy.

Mike has the following advice for other tennis families: “Enjoy the fact that you can be with your family member, just enjoy the experience. When Peg and I go on a tennis trip, we’re also spending time together. You get one-on-one time with your spouse or your child. I always felt very fortunate about the time I got to spend with my father over those 35 years playing tennis together. I had three siblings, and they never had that with our dad. It gave us a very close connection. It’s nice for Jackie and I to be able to do the same thing.”

Mike’s involvement in tennis goes beyond tournaments too. He was a past president of MTEF (the Milwaukee Tennis Education Foundation). He and Peggy have also played in the Elite ProAm, and play regularly with other Elite members.

“We owe a lot to ‘the guys.’ We’ve played together Thursdays for about 30 years. We’ve got a group going on Saturdays too.”

Peggy added, “That’s one of the keys, is to get a regular game, and then you don’t have to keep setting things up. Everybody just knows that you are playing every Thursday or every Saturday.”

Jackie has her own advice for both the seasoned player and those just getting into tennis. “For me, tennis is more fun than running on a treadmill, I’d much rather chase a ball and hit it. It’s easy to just go out with 1 or 3 other people and play a game. I think it’s more fun and social. We have a lot of good friends from tennis. For me the key is to not let it get old. I’ve seen so many people get burned out. The key is to just take it easy and have fun the whole time and keep improving.”

This story originally appeared in the Fall 2015 Issue of our Elite Life magazine. You can pick up a printed copy at any of our 5 Milwaukee area locations.