Why are Antibiotics in My Food and are They Harmful? 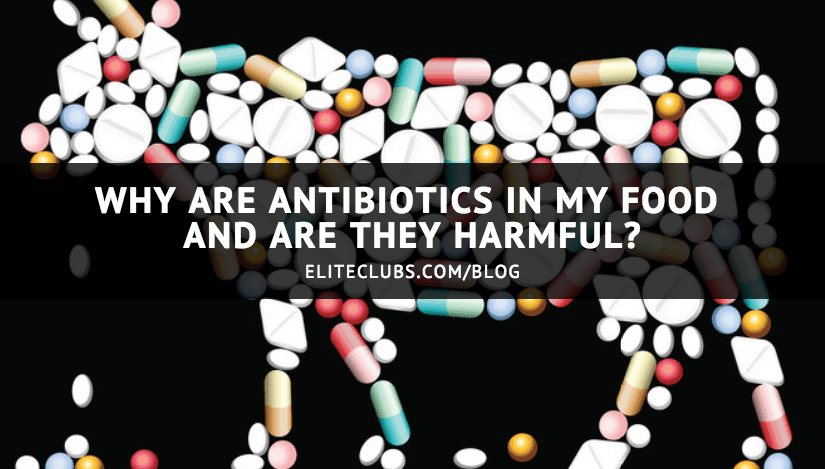 Never before have Americans asked for more pure, safe, and clean foods products than they have in recent years. The sale of these products has increased by 25% in recent years. The overuse of antibiotics in food producing animals may be part of the reason. Antibiotics are blamed for producing the increase in “superbug” resistant bacteria. If passed to humans they can cause serious illnesses. Other experts believe that this use of antibiotics in food producing animals poses no risk.

Let’s take a look at the facts surrounding the research and results from these products at different stages of their use.

Antibiotics are drugs used to treat bacterial infections. They stop the growth of harmful bacteria.

Since early in the 1940’s , antibiotics were given to farm animals in order to treat infections and to prevent an illness from spreading. Small amounts of antibiotics are also added to animal feed to promote growth. This increased production of milk and meats in a shorter period of time. Low doses may also reduce animal deaths and improve reproduction. For these reasons, antibiotic use has become widespread in agriculture.

The Amount of antibiotics in foods is very low and the chance of consuming antibiotics from food is extremely low.

Strict legislation is currently in place in the United States to ensure that no contaminated food products are able to enter the food supply. Animal producers are required to ensure that animal products they produce are drug-free before they can be used as food. Therefore, thank goodness, drug withdrawal periods are enforced for meat and milk products before they hit the marketplace. The USDA has a strict process of testing all meat, eggs, and milk for unwanted compounds, including antibiotic residues.

There is no evidence that antibiotics in foods are harming people directly.

In fact, figures from the USDA showed that the amount of animal products found to have animal residue was extremely low. And, those that did were disposed of. Products confirmed as positive do not enter the food chain. Often we will hear of the “offenders” and it becomes public knowledge quickly of their violations. There is no evidence, therefore, that antibiotics are being consumed from animal food products, let alone causing harm to humans.

The overuse of antibiotics in animals can increase resistant bacteria.

Antibiotics are generally fine when used properly for treating or preventing infections. Excessive use can be a problem. When antibiotics are overused, they become less effective for humans and animals. Bacteria that is frequently exposed to antibiotics develop a resistance to them. The antibiotics are then no longer as effective at killing the harmful bacteria. This is a great concern for public health. The FDA has recognized this concern and has updated its regulations on a regular basis for livestock and the unnecessary use of antibiotics.

Resistant bacteria can spread to humans, with serious health risks.

This bacteria can be passed from animals to humans in a number of ways. It can be passed through meat products that aren’t handled properly or cooked thoroughly. These bacteria can also be spread by consuming food crops that have been sprayed with fertilizers containing the bacteria MRSA. Once in humans, resistant bacteria can stay in the gut and spread between individuals. The difficulty in treating infections and the higher chances that treatment will fail is the biggest fear of the resistant bacteria. The biggest source of this bacteria is through contaminated foods.

Resistant Bacteria in Food Products at the Grocery Stores.

Why you probably don’t need to be concerned.

There is no clear cut evidence linking antibiotic use in food-producing animals to increasing illness due to resistant bacteria. Most reports conclude that that the danger to health is very small because proper cooking destroys the harmful bacteria. Any illness related to drug-resistant bacteria may actually be due to human use (or misuse) of antibiotics.

Bacteria transmission to the general population is rare if your food is cooked properly and good hygiene practices are followed.

How to minimize the risk of illness.

It is impossible to completely avoid resistant bacteria in animal foods. The things you can do to avoid risk are:

**You can minimize your risk even further by looking for labels that read organic, raised without antibiotics, or antibiotic-free.

Research findings are ongoing for this public health concern. Most universities from land-grant colleges have ongoing studies regarding this issue. Ultimately, the public health goal should be for consumers to be fully informed as to the very best food choices they can make, and to look for the purest and best food selections.