With Memorial Day coming up, we reflect on those veterans in the greater Milwaukee area and nationwide who made the ultimate sacrifice. Here are some ideas on how to honor them locally this weekend as well as the remainder of the year. 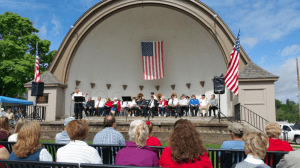 Join the City of Oconomowoc’s annual Memorial Day services, which begin at the Rhodee Memorial Band Shell at 10 a.m. The service includes a new special guest speaker every year from the U.S. Military. The band shell ceremony also includes music by the Oconomowoc American Legion Band, among other performers. Following the service, a combined representation of military service groups march through downtown, stopping at Veterans Bridge to present the colors and honor soldiers lost at sea by placing a wreath into the water. The procession then concludes at the Grave of the Unknown Soldier.

Through their award-winning exhibits and programs, the Wisconsin Veterans Museum’s mission is to acknowledge, commemorate, and affirm the role of Wisconsin veterans in America, past and present. Established in 1901, the museum chronicles the American Civil War up through the Persian Gulf Conflict and holds events year-round, including golf outings, cocktail gatherings, and public tours. A full list of upcoming events at the museum are linked here. 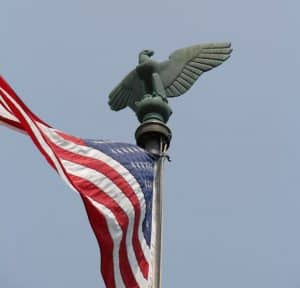 A bronze eagle sits atop the flagpole, made in 1932 by American artist Benjamin Franklin Hawkins. This statuesque monument honors the 750 Milwaukeeans who lost their lives while serving in World War I.

This shrine, “to honor the dead by serving the living,” was originally commissioned in 1950 and was finished seven years later. Its architect, Eliel Saarinen, passed away before it was completed, so his son, Eero, took over the project and brought it to life. With a design influenced by abstract geography, the western face of the building is adorned with a mosaic mural of more than one million pieces of marble and glass, created by Wisconsin artist Edmund Lewandowski.

Over the last sixty years, several memorials relating to specific conflicts have been added to the site, including memorials to Purple Heart recipients and those lost on or in response to September 11th. On Memorial Day, the city’s 153rd Memorial Day Parade will take place, starting on 4th and Wisconsin, and ending at the War Memorial Center. 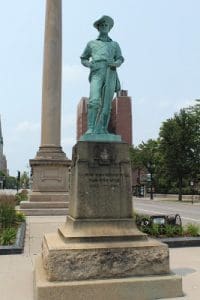 Located at Milwaukee’s Court of Honor near the Milwaukee Public Library, this bronze figure depicts a uniformed soldier with a rifle in hand and an ammunition belt around his waist. This statue was dedicated in 1932, and was made by Wisconsin artist Ferdinand Koenig. 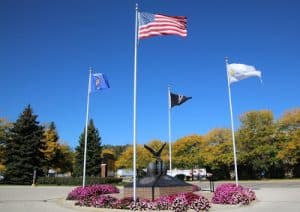 The Miller Valley Veterans Memorial is the most recent public art piece in honor of fallen soldiers on this list. When it was erected in 2010, Miller Brewery suspended production for two hours to facilitate employee participation in the dedication event. Workers who had served in the military were recognized with a commemorative coin that day. Featuring a bronze eagle sculpture atop three beer barrels, this memorial also honors the six brewery workers killed in action during World War II. 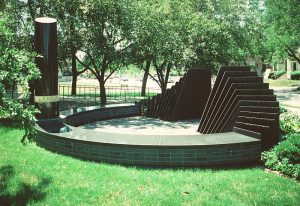 Milwaukee artist and stonecutter Claire Lieberman created the Holocaust Memorial piece with granite, brick and steel in 1983. While dedicated to the six million victims of the holocaust, this is also a powerful monument for reflection on the American soldiers who gave all during World War II.

The nephew of Arthur Grossman, a Milwaukee WWII soldier, has donated letters Arthur wrote during his service to Jewish Museum Milwaukee. Arthur died in battle in 1944, received the Silver Star posthumously, and is buried at St. James Military Cemetery in France. 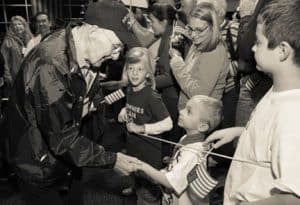 The Stars and Stripes Honor Flight provides trips to Washington, DC war memorials for those who have served in WWII, Korea, and Vietnam (and those who have served in other wars, who are terminally ill). Upon their arrival home, families and the general public are encouraged to welcome them home with signs, cheers, and hugs. It’s a great way to thank a veteran for their service and put an exclamation point on their incredible journey home from DC. For upcoming dates and flights, consult the group’s website.

Do you have any additional ways you like to honor our fallen heroes? Maybe there is someone in your family or a friend you’d like to pay tribute to? We’d love to hear your story!