Staff Stories: My First Half Marathon

Our members aren’t the only ones working towards goals and striving to become a better version of themselves. Elite Sports Clubs staff share some of their own stories about their health & fitness successes. 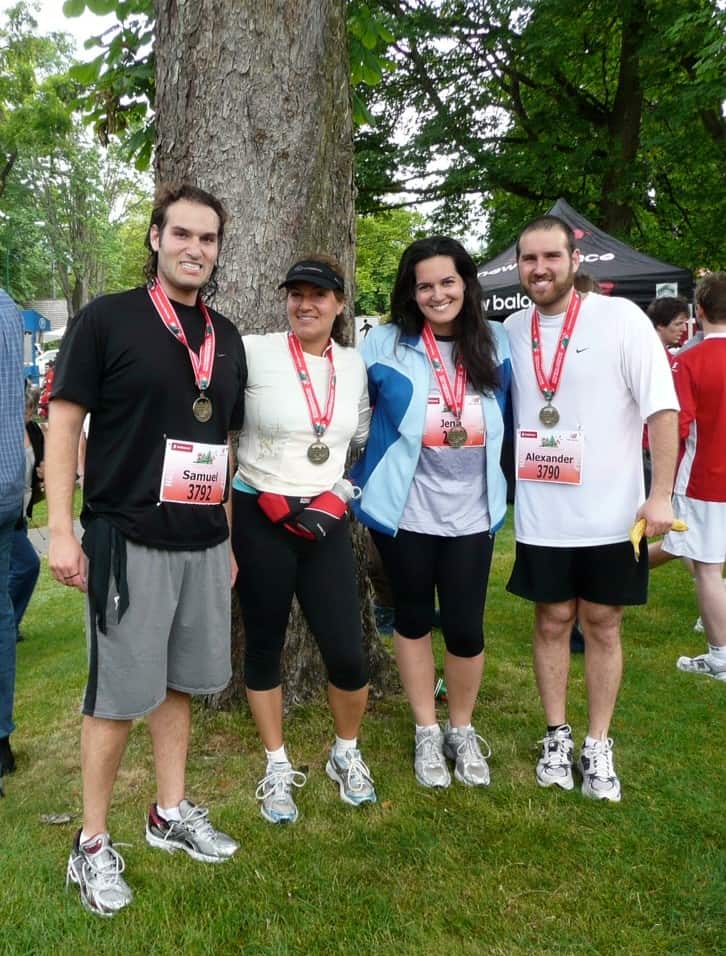 It started off as a dare. One of those situations where I said, “I’ll do it if you do it.” However, this was not just between myself and another person. This was with my sister, my brother and my cousin. We all agreed in December 2007 to run a half marathon together. My parents in disbelief agreed to fund the run if we all ran it. I was living in Phoenix, my brother in San Diego, my sister in San Francisco and my cousin in Manhattan, this was going to be a destination run. I Googled half-marathons in the late spring, early summer and found a fairly flat, if not a little downhill run in Vancouver in June 2008.

My sister was the only one of us that had done a run in the past. The rest of us more so resembled an offensive line of a football team than runners about to embark on 13.1 miles. My brother and I are fairly competitive. We trained together even though we lived far apart. In January, we started our training with the correct footwear. We bought running shoes and also each bought a Nike Plus to track our runs. I did not do a typical training program. Instead I just “winged it.” All I knew was in 5 months I needed to keep my feet moving for about 2 hours.

My first big hurdle was running one mile. As simple as that sounds now, I struggled when I started. However, it did not take me long to achieve that minor milestone. My brother was ahead of me with his training and warned me of the next hurdle–the 30 minute continuous run. I would go out at first and run as long as I could. I would make it 15 minutes, then walk a minute or two and then run more until I hit 30 minutes. It took me a good two/three weeks to get to 30 minutes of continuous running. Once I hit that mark, I realized that running is as much mental and it is physical. I was astonished that I could do it. After I could run for 30 minutes, I gradually increased my run times and distances. I got up to 10 miles two months before race day. (Before I go into the actual half-marathon experience, I have to say I do not endorse my program. It is not typical and if you are planning on training for a half-marathon, please consult a professional on a program.)

We all arrived in Vancouver and checked into the hotel where all the other runners were staying. You could easily tell who the runners were from the other guests. This is when I realized that this was BIG. The day before the race, we registered, picked up our bibs and went to the trade show. The trade show was an eye-opener. There was so much cool running gear. I then started realizing that running is a huge sub-culture.

On the day of the race, I did my running routine, but this time at the crack of dawn. I had a bagel, banana and an energy drink. We got our bibs on and left our hotel. All I remember were runners and that they were everywhere. My siblings, cousin, and I found a spot to do our stretching. I recall a man saying, “This is going to be fun. There are a lot of people to pass.” I thought that was so cool to have that confidence. That day my goal was to finish (and beating my brother would be a bonus). The experience was surreal. I have never been a part of something so big. My adrenaline was at a high. I was part of something, along with 15,000 runners all with a common goal–to run across the finish line.

The gun went off and I was amazed on how slow it took to even cross the start line as I was stuck in a pack in the back. I ran the first 3 miles with my brother when I wanted to run faster. I found a group of people going at my pace and ran the entire half-marathon with them. When I finished, I received my metal, got water, food and my belongings. I called my parents and found that I was the first to finish in my family. One by one the rest of my family finished.

Since that race, my sister and cousin have run 2 races together; I have run another with my brother and we are planning our next race. Going from a “I can’t even run one mile” person to now identifying myself as a runner has become a great gift, and I am thoroughly happy to be part of the running sub-culture.

We’d love to hear YOUR story! Submit your story of success (and even struggle) and you may be featured on this blog or even in our seasonal magazine!