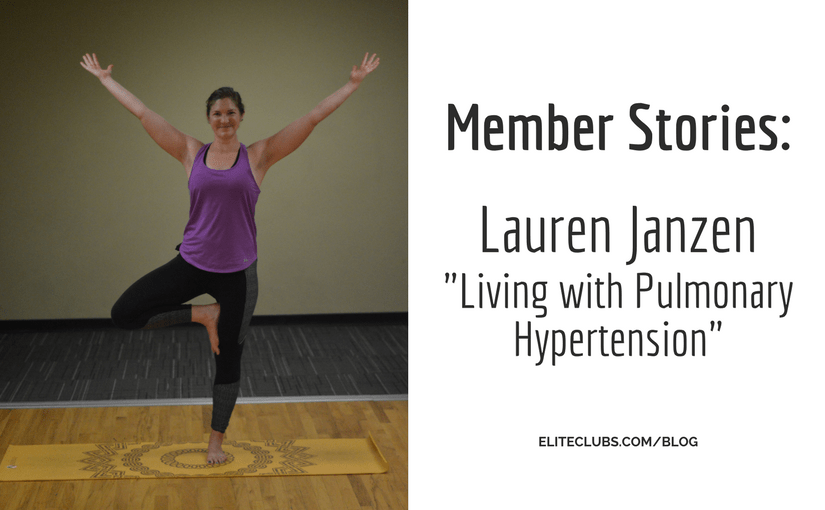 Lauren Janzen and her husband Joe have been members of the Elite Sports Clubs family and community for around 3 years now. Lauren joined shortly after her husband became a personal trainer at our Mequon location. She loves the activities and classes offered by Elite and regularly participates in cycling and yoga classes. The classes make her feel a sense of motivation as she works out with other people around her. She uses the club around 2 times a week in summer and 4 to 6 times a week in the winter. She uses the club less in the summer as the weather allows her to be able to cycle outside.

Over the last 15 years, Lauren has worked in health care, and has been a registered nurse for 6 years, after receiving her degree from Carroll University. She worked for 3 years at St. Luke’s, then transferred over to her current position at the Milwaukee VA hospital, where she plans on staying until retirement. It hardly feels like work though because she loves her career, the veterans, and her coworkers. She currently works in the post-anesthesia care unit for patients after they wake up from surgery, which means there are always new patients and new experiences each day.

Strong throughout the struggle

While attending Carroll University, Lauren went through some of the roughest times of her life. While her boyfriend, now husband, was abroad in South Korea, Lauren collapsed after taking a group exercise class. This lead to a diagnosis of Pulmonary Hypertension. This is a condition caused by the pulmonary artery being constricted, causing back pressure on the heart. This causes hypertrophy of the right ventricle, which can lead to heart failure and ultimately death. This condition affects 1 in every 100,000 people. Lauren was diagnosed at the age of 21, only 5 days after visiting Joe in Korea.

Throughout her life, Lauren had always been very active, but some days felt harder than others and she wondered why it took her so long to recover from activities sometimes. She finally had the answer after being diagnosed at St. Luke’s where she later got a job on the floor she was held on.

After being a patient for 5 days at St. Luke’s, she began to look at cardiology as her second love, which drove her into her job there. She enjoyed the work but wanted to pursue other opportunities and she has since moved on to the VA, but still loves cardiology.

Lauren technically should have been dead 2 or 3 times now but feels stronger now than she did before the diagnosis. Lauren credits her doctor Dr. Diane Zwicke with her current health. She also helps Dr. Zwicke with education about the disorder and treatments during conferences and lectures at hospitals and colleges.

Currently to combat the issue, Lauren is on a small constant IV pump that continuously infuses her blood through a line that goes directly into her heart through a small hole in her chest. This medicine remodeled her heart back to like-normal function. But, if that pump were to stop, she would have around 4 hours before she will rebound and her body will lose sensitivity to the medicine, leading to eventual (potentially irreversible) heart failure.

With this disorder and being tethered to a machine, there are certain activities such as swimming or showering that are either difficult or impossible to do. Along with the pump, the hole in her chest also requires constant care to prevent infection. An infection would spread directly to her heart and blood, causing sepsis (bacteria infecting the blood stream).

This has been a huge motivator for Lauren to stay active. She realized that on the days she works out and stays active, she feels better. On the days she is a bit more sedentary, she feels worse. “I know how I feel when I workout and when I don’t workout, and there’s no comparison.”

As a Certified Strength and Conditioning Specialist, Joe has been a huge advocate for Lauren’s health and fitness. He communicates with Lauren’s doctor to determine the most appropriate plan for incorporating a well-rounded strength routine. He motivated her to improve her love/hate relationship with strength training and stray from just cardio. She now understands the importance weight training makes in her everyday life and in her adventures. Joe believes that “when you increase your absolute strength, your perceived difficulty in any given task is less – making anything from climbing stairs to mountains seem easier. It places less strain on the heart when your muscles produce more force with less effort.”

Lauren doesn’t always enjoy working out, but she understands that without it, she would not be where she is today. “Life is never as good or as bad as it seems, it could be way worse.” The idea of keep moving forward and self care should be the real motivator.

Support from friends and family has also been important to Lauren’s success. She credits her family and Joe’s family for their support, and she has a wonderful group of friends in and out of nursing that have helped her through school and life. “I’ve met some really great people that have helped me through my dark times in the past 8 years of being diagnosed.”

What Elite does for her

Stress and anxiety play an overall role in Lauren’s health, so the yoga program at Elite has also aided in her finding a healthy balance in her life. “The stretching of the mind and body is really important.” She likes all of Elite’s yoga instructors for various reasons, including their teaching style and the flow of the asanas.

With road cycling being a large part of Lauren’s life, she also takes many of the cycling classes offered at Elite. She uses the classes to maintain her ability when the weather doesn’t permit road cycling. She enjoys Paul Alexander’s class the most because of his style of teaching and his personality in and outside of class.

Lauren believes strongly in the mantra, “work hard, play way harder.” She has traveled to Europe five times and Asia two times. She has been to Costa Rica, Puerto Rico, all over the U.S., Germany, Switzerland, France, and Thailand for her honeymoon. She loves being able to travel and feels lucky to have found Joe who has similar interests. Lauren also travels once a year with her mother to a new place each time. In high school, she even did a foreign exchange program to Germany and although she isn’t a master of speaking German, she knows enough to get by.

Along with being quite the travel guru, Lauren enjoys summer cycling and does bike tours and charity rides. She also volunteers with the Leukemia and Lymphoma Society doing the Scenic Shore Ride. Recently, Lauren completed the Peninsula (metric) Century tour which is a 62-mile ride. The longest ride she has taken part in is the MS 150, which is a two-day ride of 75 miles a day.

Even with her condition, Lauren still keeps good spirits and feels very fortunate. “Do it while you can because you can. You are not guaranteed anything.” She does not let her Pulmonary Hypertension hold her back.