The History of Tennis & Exercise Throughout Elite’s 30 Years 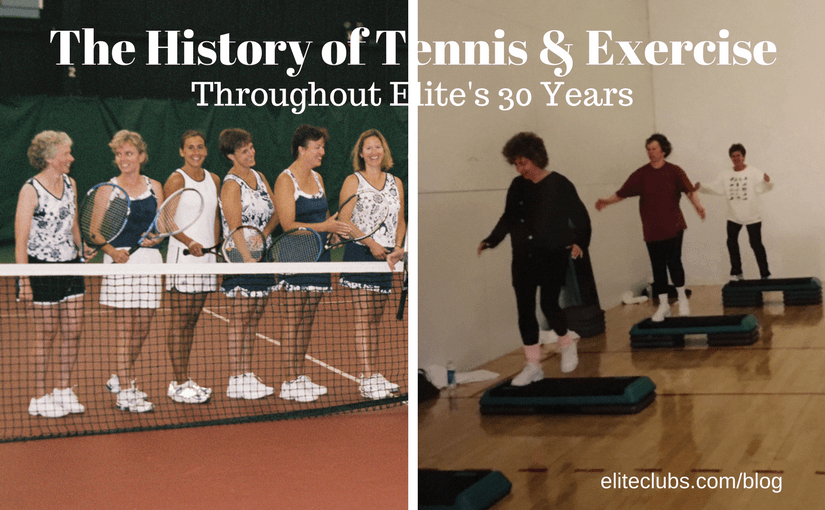 As a whole, tennis and exercise have a lot of moving parts. However, by looking at the history of each decade by-decade, we learn about what specifically has changed, what has improved, and what has expanded within in each field since Elite opened in 1986.

This decade was a time of great change for players. With the formation of tennis unions, athletes could play as free agents, gaining freedom over their careers. As a result, big players started to emerge because they could control when and where they played, filling tournament spots with the best of the best.

With tennis popularity on the rise, all varieties of media began covering the tournaments from start to finish to watch the action unfold. For example, the late 80s were dominated by superstars John McEnroe and Ivan Lendl on the men’s side, and Steffi Graf and Monica Seles on the women’s. But professionals were not the only players impacted by the changing tennis climate.

The passing of Title IV, high school and collegiate tennis formalized competitive tennis for both boys and girls, allowing the sport to seriously grow throughout this decade. High school and collegiate athletic associations, such as the Wisconsin Interscholastic Athletic Association (WIAA) and National Collegiate Athletic Association (NCAA) began hosting tournaments more frequently at this time, allowing players to compete on a regular basis.

Around the time Elite opened, high impact aerobics and step classes were among the top trends. In these classes, upbeat music kept people energized and motivated, helping shed a positive light on fitness like never before.

Dressed in mostly neon colors and spandex, athletes everywhere started to understand the benefit of exercising with friends and in groups, where pack mentality fostered an encouraging workout environment.

This period was greeted by a remarkable difference in racquet technology, as heavier racquet heads and structured frames changed the pace and power of match play forever.

A greater understanding of and emphasis on proper hydration, nutrition, and recovery during training periods also came about at this time. This focus greatly influenced how kids developed in the game too when tennis academies started to emerge across the nation and their interest in the game was sparked.

As a result of this increase in group fitness, there was a surge in fitness clubs and gym-only establishments. These provided a space for members to also use personal exercise equipments that had recently become popular, including Thigh Masters, Heart Rate Monitors, and treadmills with TVs. In addition to equipment, there was an improvement in athletic shoe technology, allowing people to find the right shoe for their activity level and sports.

Although many began to grasp the importance of fitness as a whole, diet was also roped in with the industry at this time. Exercise no longer stood alone as the key to wellness, but exercise combined with a balanced, healthy diet allowed athletes to perform at their best.

“People are getting more active than ever before because of the many positive effects of being physically fit. Staying active improves quality of life, builds confidence and enhances one’s social support and network,” Elite North Shore Personal Trainer Grace Selwitschka said.

There was a quiet decline of dominant U.S. players as fierce European competition got stronger.

“For tennis to really grow in the U.S. we will need some outstanding champion to take over the tennis world like Steph Curry did for basketball or Tiger Woods did for golf,” Elite River Glen Tennis Director Wally Bronson notes.

Perhaps the most important change in tennis over the past ten years is the introduction and development of the USTA QuickStart Tennis program for children 10 and under, which teaches tennis to kids on a smaller, appropriate scale.

Elite was the first club in Milwaukee to adopt this QuickStart program, and has since developed much of the young talent in Wisconsin, many of whom have gone on to play at higher levels.

“Elite has been at the forefront of developing junior players in the Milwaukee area. They have taught more junior players than any other facility in the state,” Wally confirmed.

“They have produced more national players and college players than anyone else in Wisconsin.”

The presence of cardio sets this decade apart from the previous two, as fitness classes and industry professionals began to heavily emphasize cardio as the path to heart health and weight loss. As the field of exercise science progressed, people understood which exercises benefited certain muscles and joints, also improving rehabilitation efforts.

The world of fitness, like many industries over the past 10 years, was hit by a technology wave, resulting in programmable activity tracking devices like Fitbit and various smartphone apps flooding the market. Influence from sports and pop culture celebrities also contributed to the rise in these devices and even the fashion to match.

Since top athletic brands like Nike and Adidas dominated the market, the industry has also been tapped into by athleisure (athletic + leisure) brands like Fabletics and Lululemon. Many of the products on the market now are form fitting, versatile, and designed with climate-control in mind.

We’re excited to see where tennis and fitness takes us in the NEXT 30 years, along with the future of the Elite Sports Clubs as a whole! This year we celebrated our 30th Anniversary, and now we’re looking forward to the next 30 years!