Finding Enjoyment in the Game Fosters Success on the Court 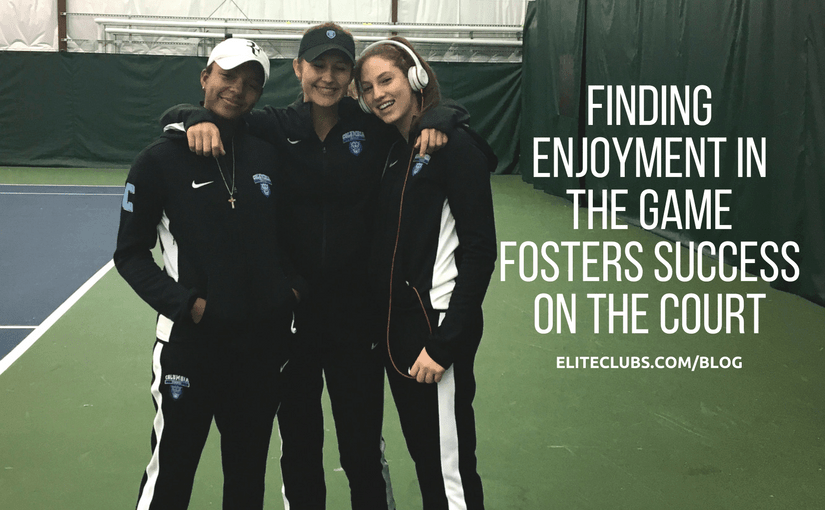 You may recall our post last spring on Ali Pollack, the first student athlete in Wisconsin to ever be recruited to play for Columbia’s tennis team, an NCAA Division One Program in the Ivy League Conference. Well we caught up with her this fall to see how her first semester at Columbia was going. She shared how Elite prepared her for tennis at the collegiate level, plus how her continued passion for the game will keep her playing for years to come.

Ali is ranked as a five-star recruit by the Tennis Recruiting Network, the top recruit out of Wisconsin and ranked as high as No. 54 nationally. She was even the youngest tennis player to win the individual state title in Wisconsin at age 13. But all this started many years prior.

Ali has been going to Elite since she was a child. She and her family also belonged to Le Club when she was just a toddler, prior to Elite’s acquisition of the facility. However, once tennis came into the picture, when Ali was about 6 years old, they became members of Elite because her first tennis pro was Chip Liefert at Elite’s North Shore location.

At that time, the USTA had not started their QuickStart 10 & Under program yet. So, Elite offered their own original version of youth lessons at the clubs.

It wasn’t until Ali helped teach tennis lessons locally last summer that she was first introduced to the new USTA youth lesson format. “I’d heard about it, but obviously I never experienced it. I thought it was actually a really good idea because the kids could start hitting, build confidence in their strokes, and enjoy it more. I know when I was little, when we weren’t strong enough to hit the ball, we had to have two hands on both sides—that’s how they would teach it. And then to learn a forehand with one hand, you would release it. I think this is more effective.”

Even without the new, more “kid friendly” lesson format, it was no surprise that Ali excelled in tennis starting at a young age.

“My mom started playing when I started. She learned it to be able to hit with me. So, I always had my family playing with me and I found it really enjoyable and fun. My dad played when he was around college age, and in high school. He just kind of taught himself and didn’t really take many lessons; he was pretty naturally talented. All my siblings, everyone around me played, so I wanted to play. I just found a likening to it.”

But tennis wasn’t Ali’s first and only love. She also had a passion for dance. Yet, as many young athletes today, it got to a point where Ali had to choose where she wanted to spend her time and efforts. Unfortunately, as many of us know, it’s impossible to dedicate ourselves entirely to more than one thing.

“When I was little I was also doing dance, but I had to pick between them when I was 10, so I picked tennis. I spent so much time at the dance studio and on the courts for tennis, it just wasn’t feasible to do both.”

It was around that age that Ali started traveling for tournaments, and they took up much of her time. “So, my mom said, either you get serious about one of them,  or do both, but just do each once a week.”

As soon as Ali decided to dedicate herself to tennis, she really started to excel. “When I was around ten, I started going out of Wisconsin for tournaments. Before I just played some rookie tournaments around the cities of Wisconsin. But when I started playing more Midwest tournaments, I got to see different levels that I didn’t even know existed. I remember the first time I traveled long distance, I went to a national tournament in Texas for 10 & Under and I saw a completely new level of play. It was really intriguing for me. After that I just tried to get better and better.”

But Ali didn’t realize she wanted to play college tennis until her freshman year of high school. “I had a talk with my mom and we made a decision. We had to decide if I was going to go on the college tennis track or just be a normal student who played as a hobby. She saw my potential and she helped guide me to that decision. Which was the right one.”

So, once the decision has been made, how does a young athlete find their way to the collegiate level?

During the transition from Middle School to High School Ali started focusing more on fitness, because she felt that a lot of good players transitioning into high school tend to “fall off the grid” if they don’t focus on their fitness.

“I used the gym and I would do yoga classes a lot, as well as strength classes. In high school I did more classes than I had ever done before and I thought it was a better way to work out, at least for me, because it was more exciting and interesting than just running on a treadmill for 30 minutes. I really loved the classes, so I know when I come back I’ll be doing those.”

Starting freshman year, Ali started taking private lessons with Rick Vetter — her final coach at Elite. “He really helped me with my game. We worked a lot on movement and being an aggressive player, also on being strategic. That was a big thing. That’s one of the better parts of my game, that I’m very strategic. I can figure out what my opponent is doing and anticipate well. My mom also worked with me a lot. A couple times a week we would go on the court and use the ball machine and she would be there to make sure I was working hard and focusing on the right things.”

It’s clear that Ali didn’t become a successful player all on her own. She credits her growth as a player to many people. “I would say for sure Chip, and Rick, and my mom, as well as Jon Calvillo—he also really helped me. He was very motivating and always supported me. I’ve known him forever, my whole tennis career, through playing tournaments in Wisconsin. I went to drills with him, he always believed in me and was a good person to have on my side.”

Ali feels that the coaches and match play available through Elite really helped prepare her for the collegiate level. “Elite offered a lot of different levels of drills, so over the years I knew I could find a drill that would push me enough to make me better. Also, a lot of the top players in Wisconsin went to Elite, so there were
always good people around to hit with. And obviously my first and my last coach were there, so I was kind of always at Elite. The coaches at Elite, even in drills when it wasn’t one-on-one, would push me and make sure I was trying my hardest. They always offered good drills and new ways to think about the game and improve my level.”

“I’m about two and half months in [at Columbia] and I feel very prepared. The drilling here and the training, I feel very prepared for—it’s just like drills back at home, but high intensity. I know when I come home for breaks, I will be training at Elite to keep my level up.”

Since Ali started playing tennis very young, she knows the toll the game can sometimes take on kids. “For young players just starting out in tennis I would give the advice to find the enjoyment in the game and stick with it. It will get tough at times when you’re training and you don’t want to push through, but if you just think about the reward and how much you enjoy playing the game and being successful, it will be worth it and you will push yourself.”

For other young players wanting to compete at Ali’s level she says she would advise the same thing. “A lot of people transitioning into high school drop off tennis because it becomes too intense. But collegiate tennis is so fun if you have a team around you to support you. Even matches are completely different. At tournaments your team, even if they’re not playing, is sitting there and cheering for you and you know you’re not alone on the court. It’s totally worth all the training.”

Ali sees herself continuing to play tennis for years to come. “I think tennis is a lifelong sport. You can play no matter what age you are, so I think it’s a really good game to invest in, even if you’re not trying to play college or play every day. It teaches you a lot about life, how to stay calm, how to react in different situations. I think those are really important skills to learn, and of course tennis is pretty fun too. I’ve enjoyed it.”

“I know for sure I’ll play when I can after college, it kind of depends on how rigorous my work schedule is, where I am, and what I’m doing. But whenever I have free time I can’t see myself just stopping. It’s such a big part of my life that I would want to keep playing.”

And hopefully we’ll keep seeing Ali on the Elite courts for years to come as well! Ali says her favorite thing about Elite is the people. “Since I’ve belonged there for so long, I know a lot of people at all the different clubs. You can go there and see friends, swim, play tennis, or go workout with a friend.”